By jen mckenNovember 6, 2017 No Comments

October can be a tough time for photographers….it’s what we like to call “busy season”. It’s often hard to carve out (see what I did there) time with our own families in between photographing other people’s families, editing and shooting weddings….it’s prime season because everyone wants the “pretty leaves”. October is also the month that kind of kicks off all of the Holiday festivities. It’s Mallory’s birthday month, the pumpkin carving, halloween/trick or treating and then BOOM…right into Thanksgiving and Christmas. If we get behind in editing, it means we get to spend even less time with our own families during the holidays months in order to make the deadlines. So I covet these moments and these moments with my family.

This year everything is different. Sure, we had Levi last year at this time, but he was basically a lump. haha! He didn’t do much and had no idea what was going on. Now that he’s almost one and half, he is more fun……also MORE on the go, but it will make this holiday season a little more special. Us parents live vicariously thru our kids during the holidays and everything becomes magical again. We experienced a “first” as a family of four and that was our trip to the pumpkin patch at Reeger’s Farm. It was hot, and Levi was on the go go go…but he rode on his first hay ride, went to his first pumpkin patch and picked out his first pumpkin.

The fun didn’t stop there, we hauled them home and carved them…and then played dress up with our halloween costumes! 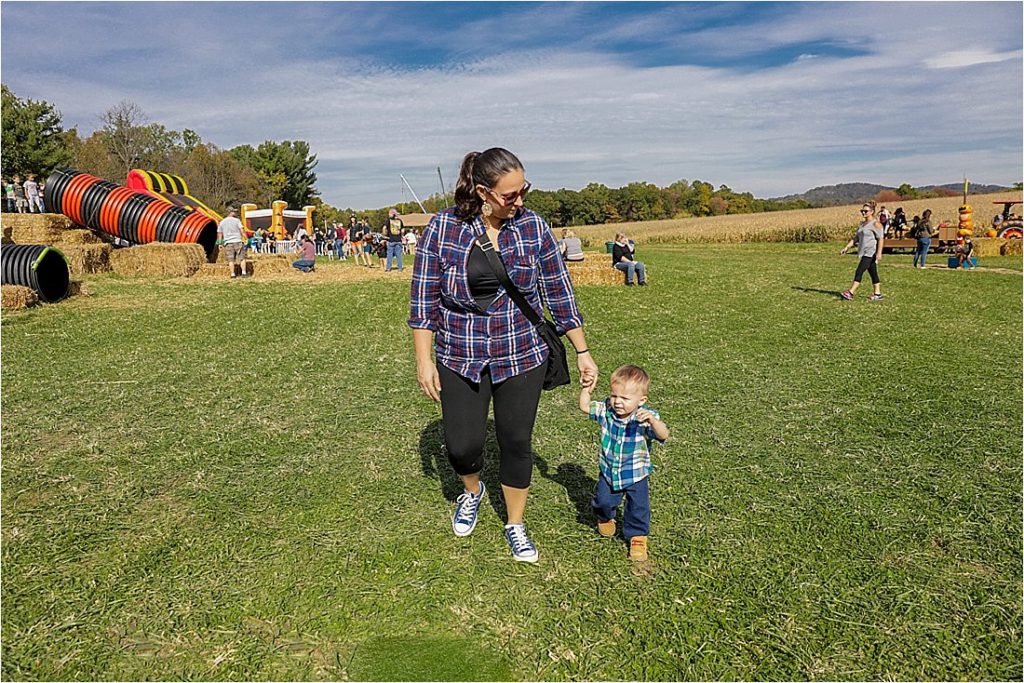 I love this picture because each year he’s going to get taller and taller. They are only little like this once! *sniff* 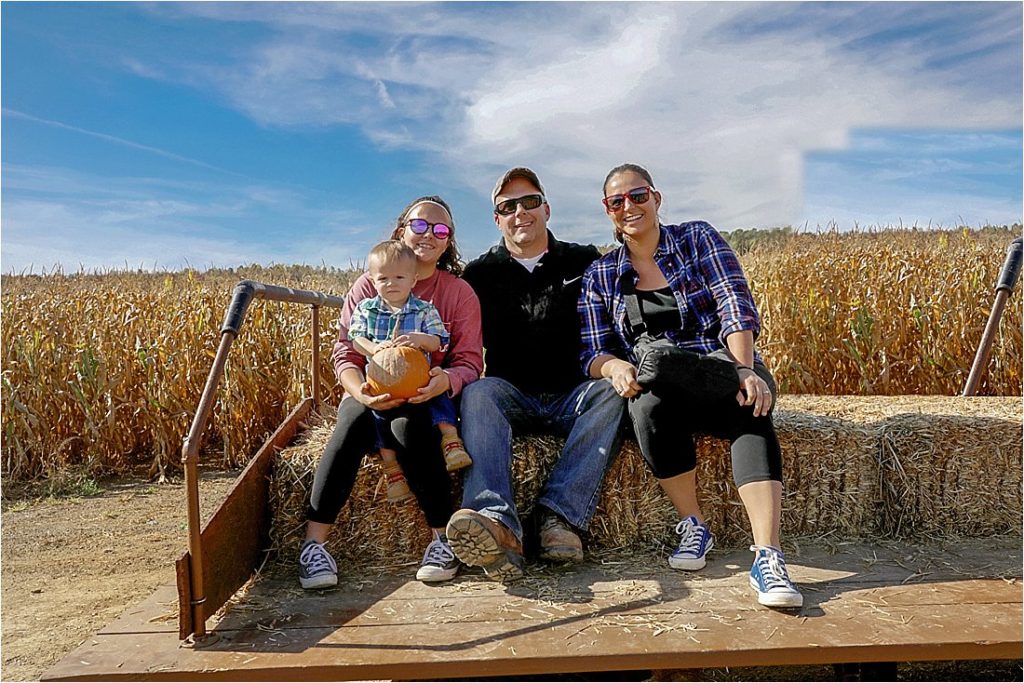 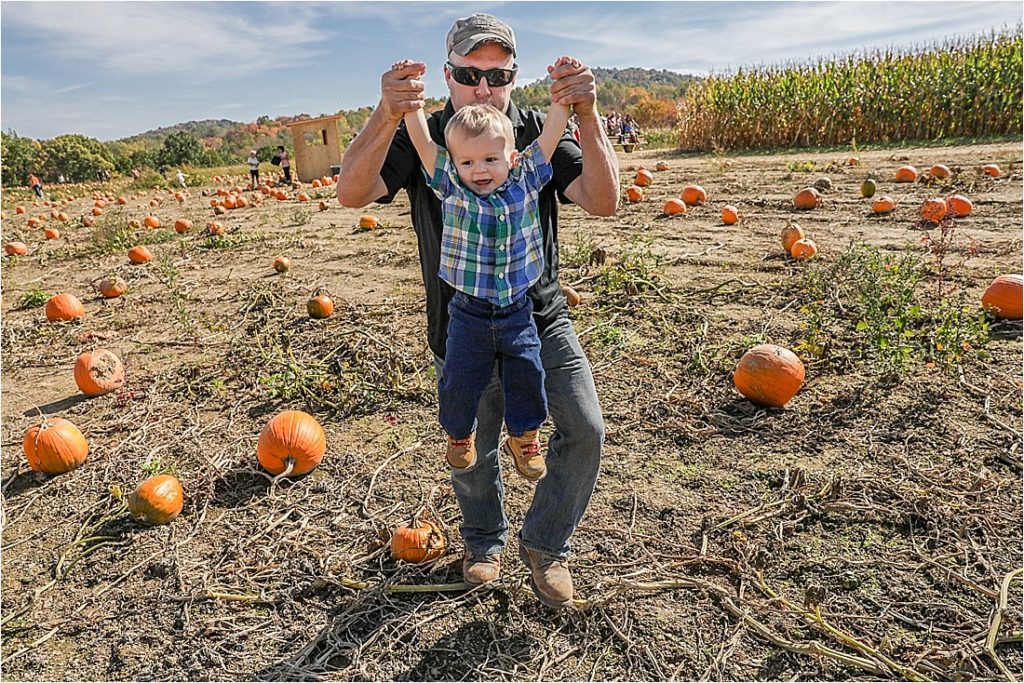 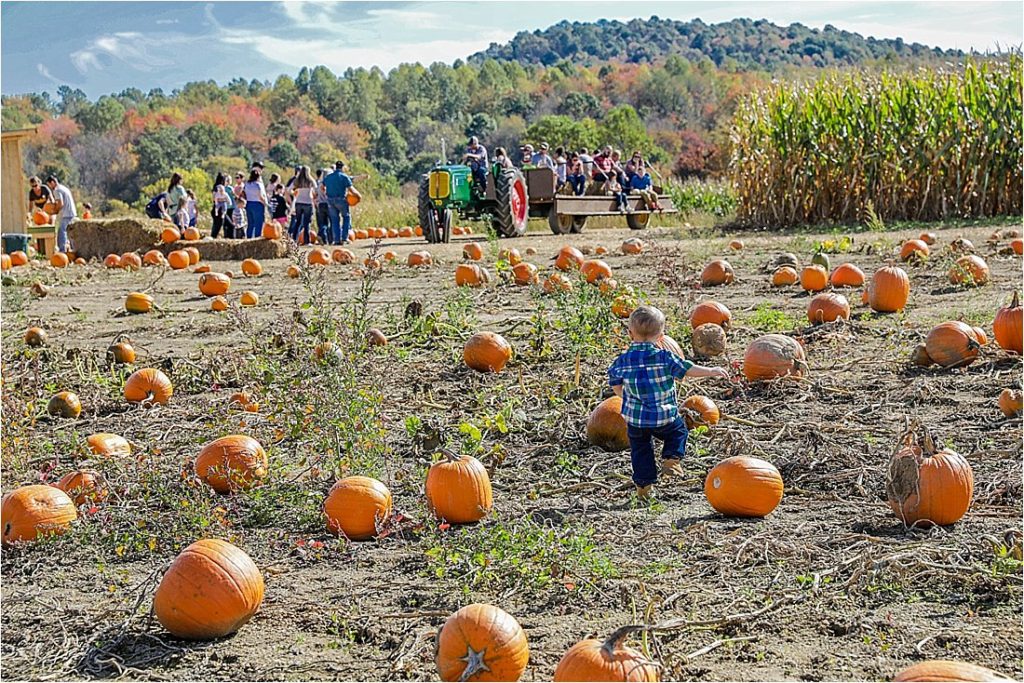 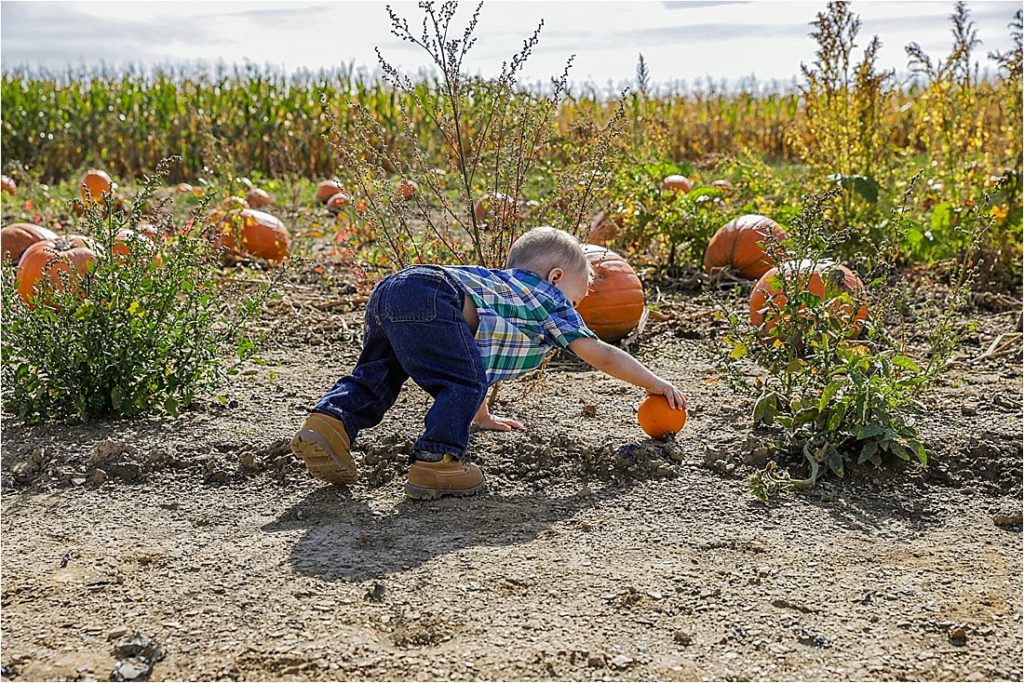 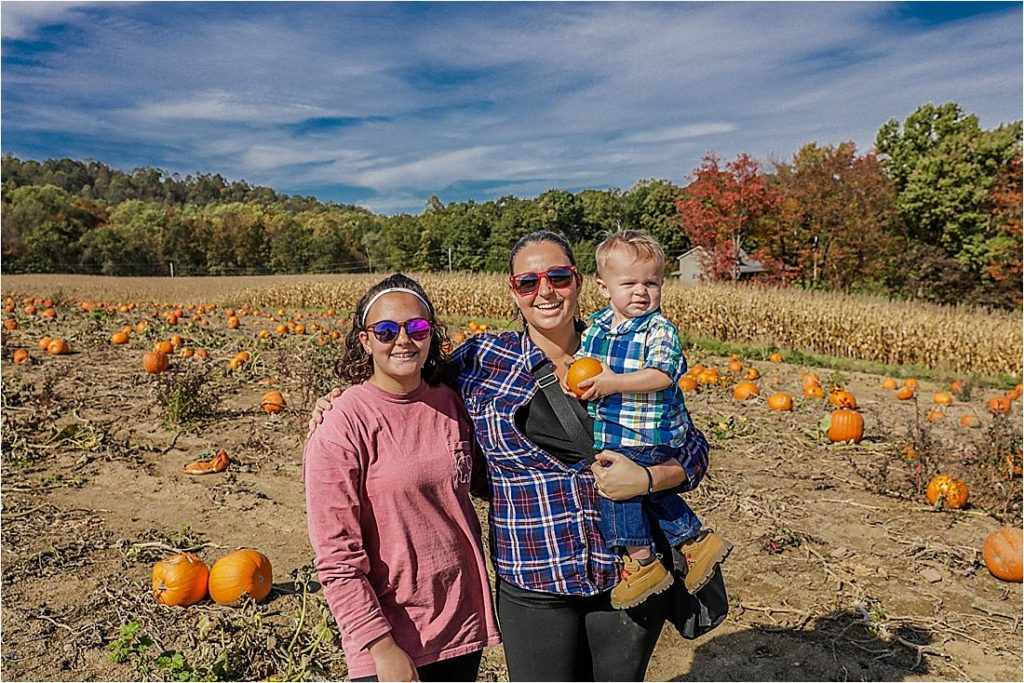 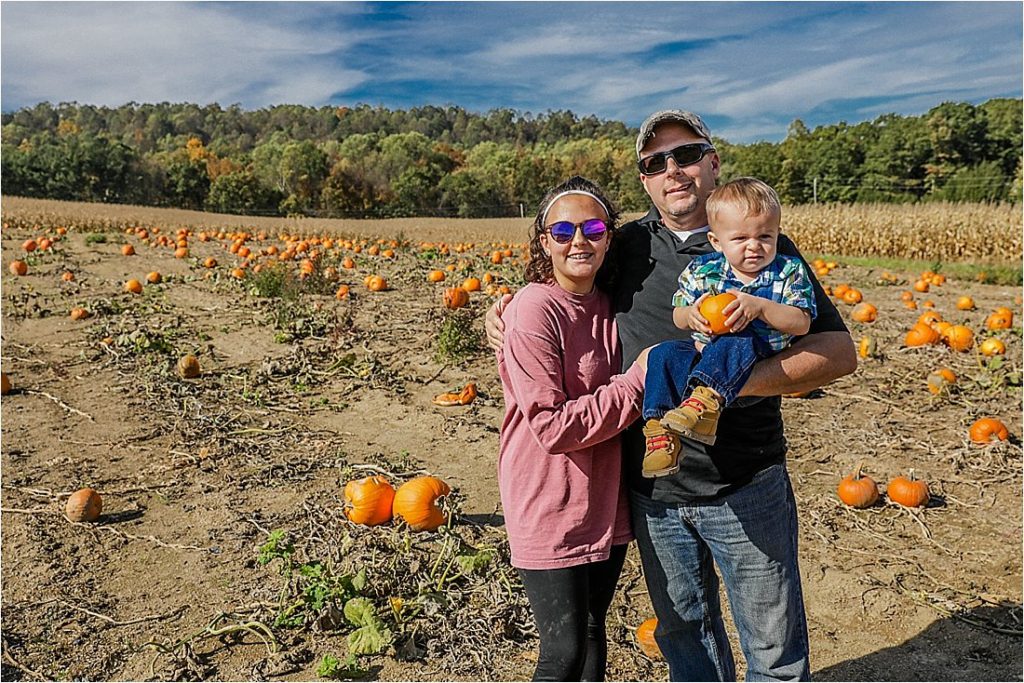 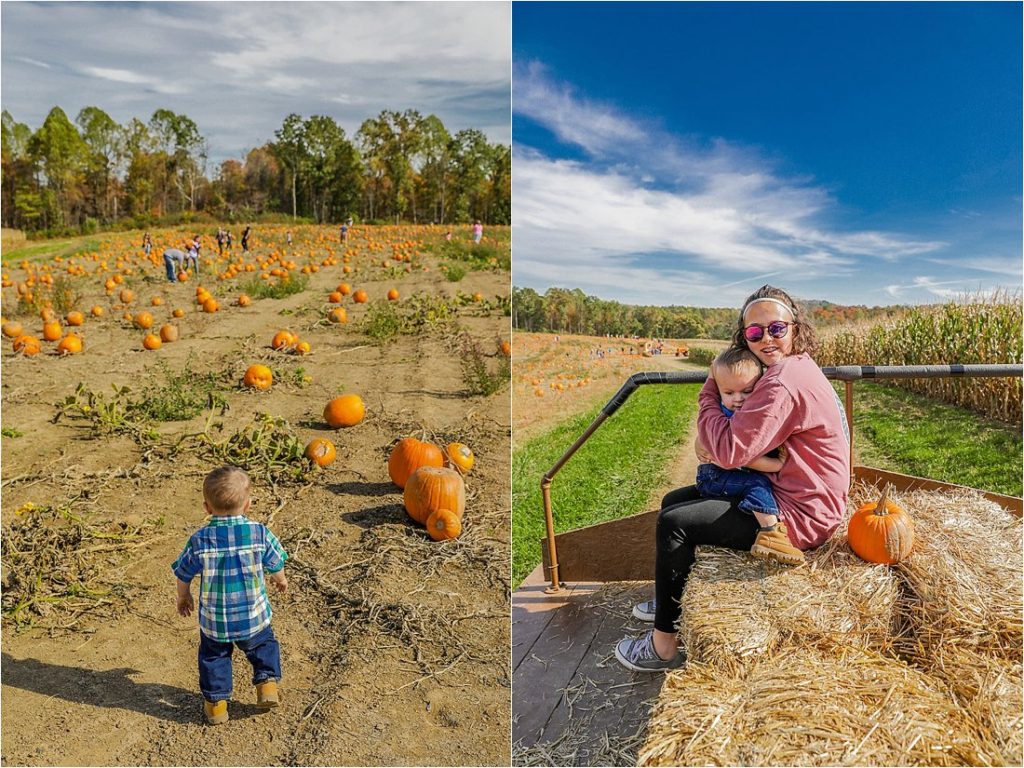 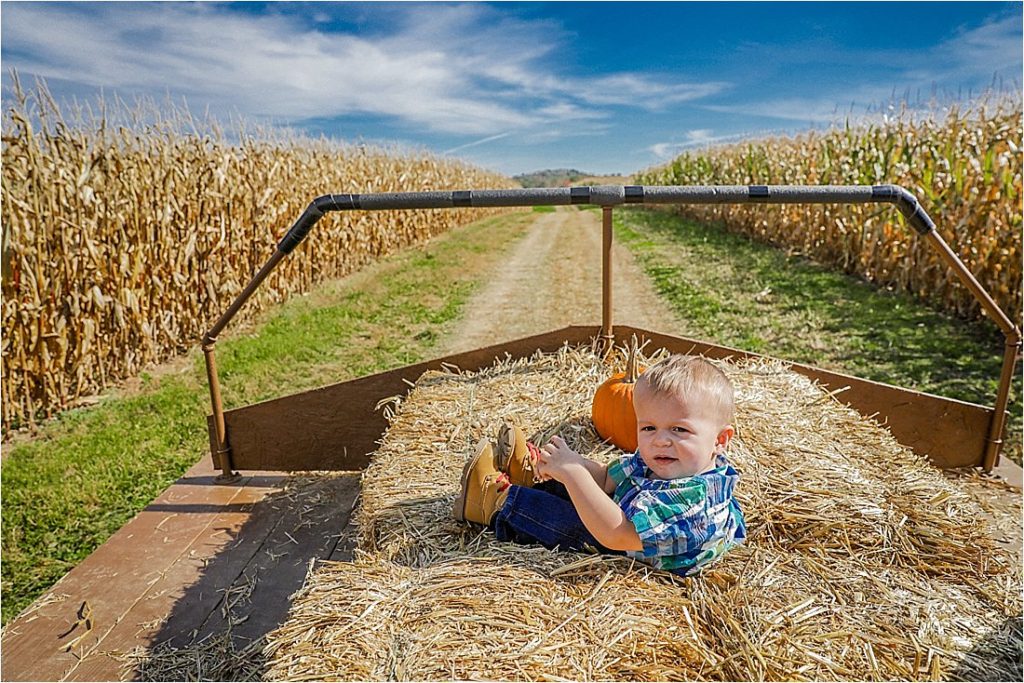 That’s what he gets for not sitting still on the hay ride! haha! 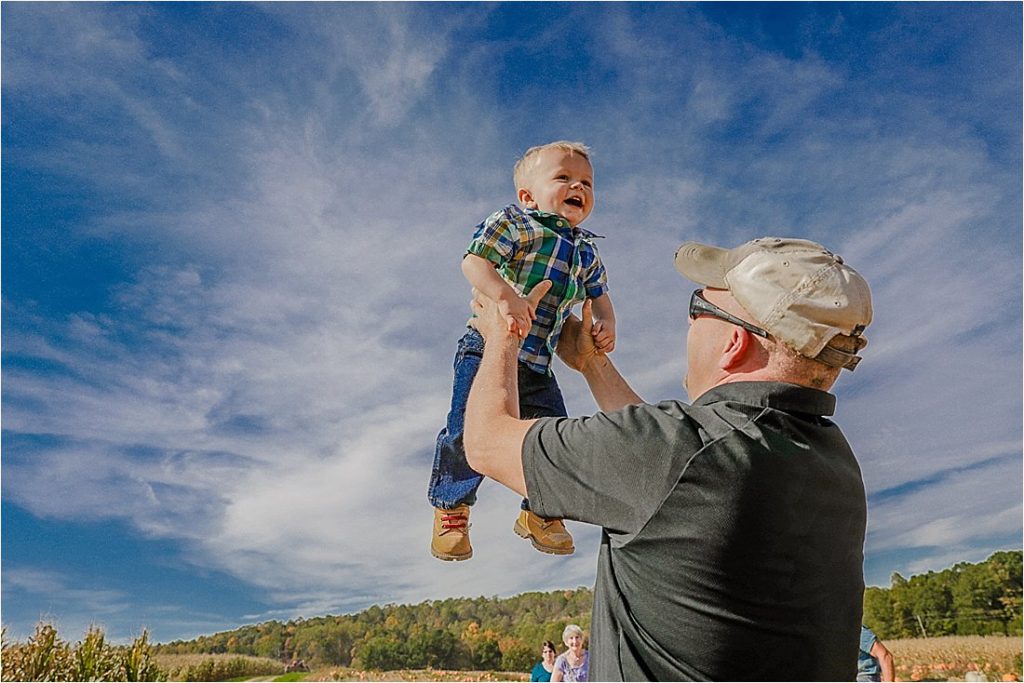 ………and then we headed home to carve them! 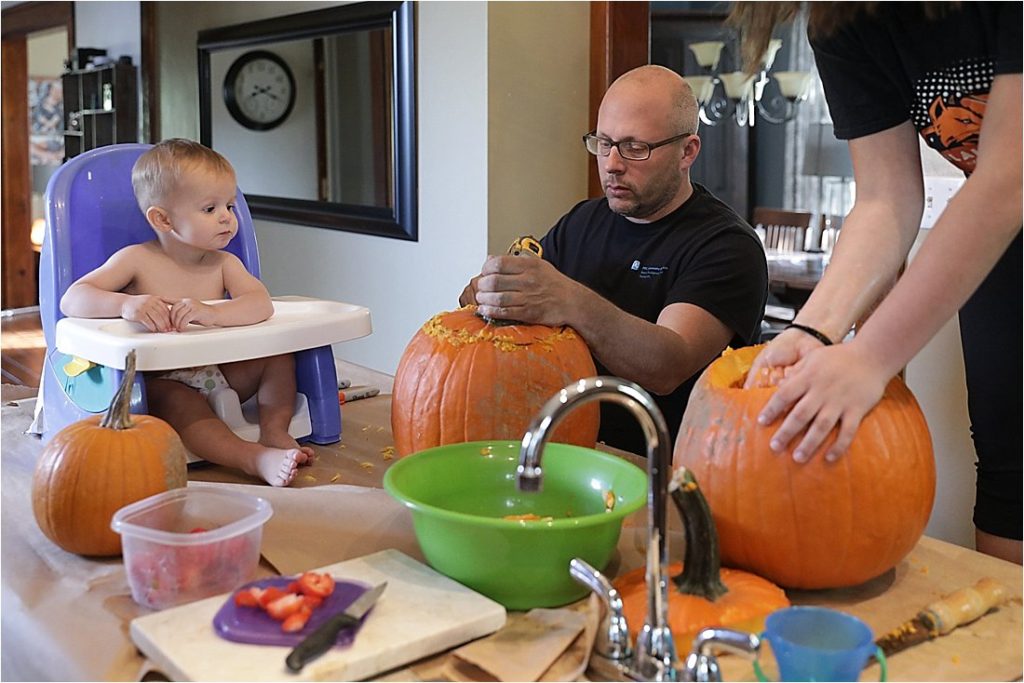 Although we got him practically naked in preparation of there being a mess….he didn’t want anything to do with the slimy parts. 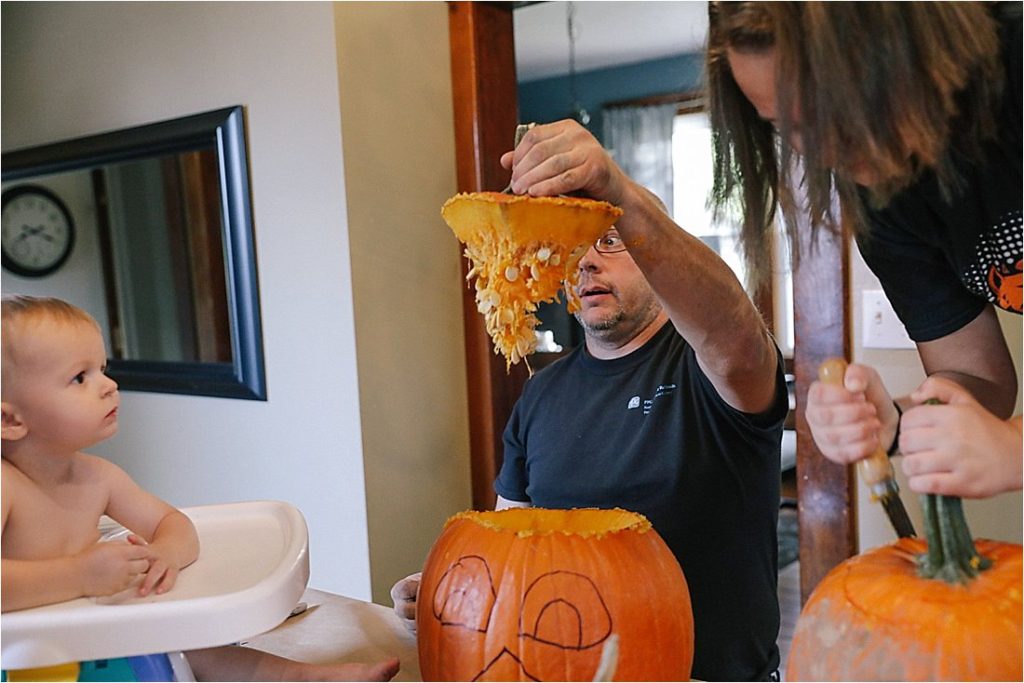 He wasn’t having it! 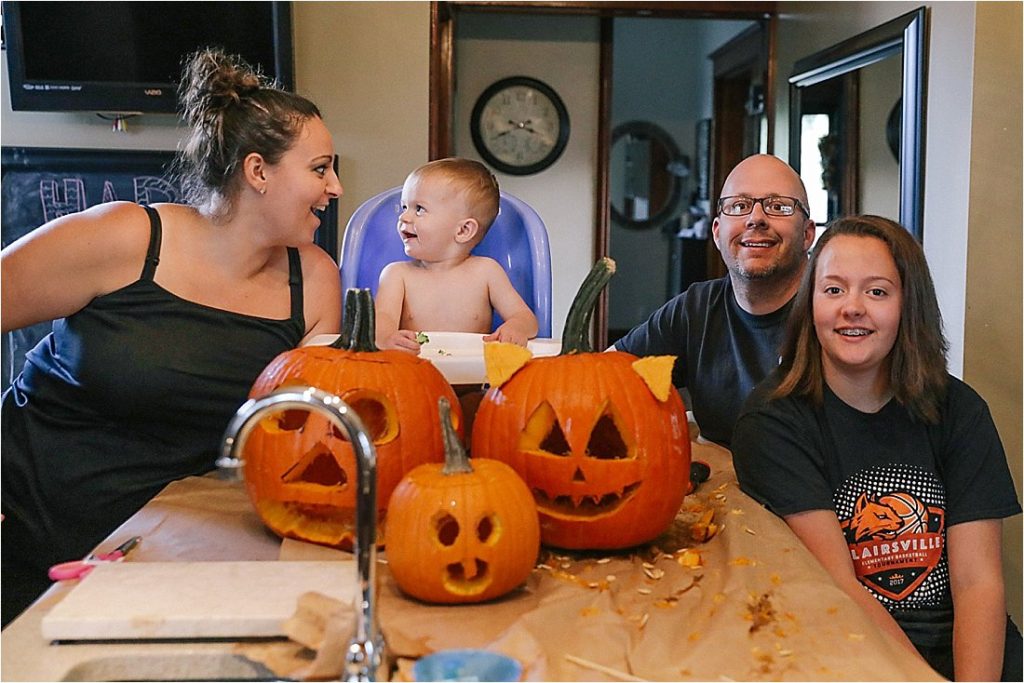 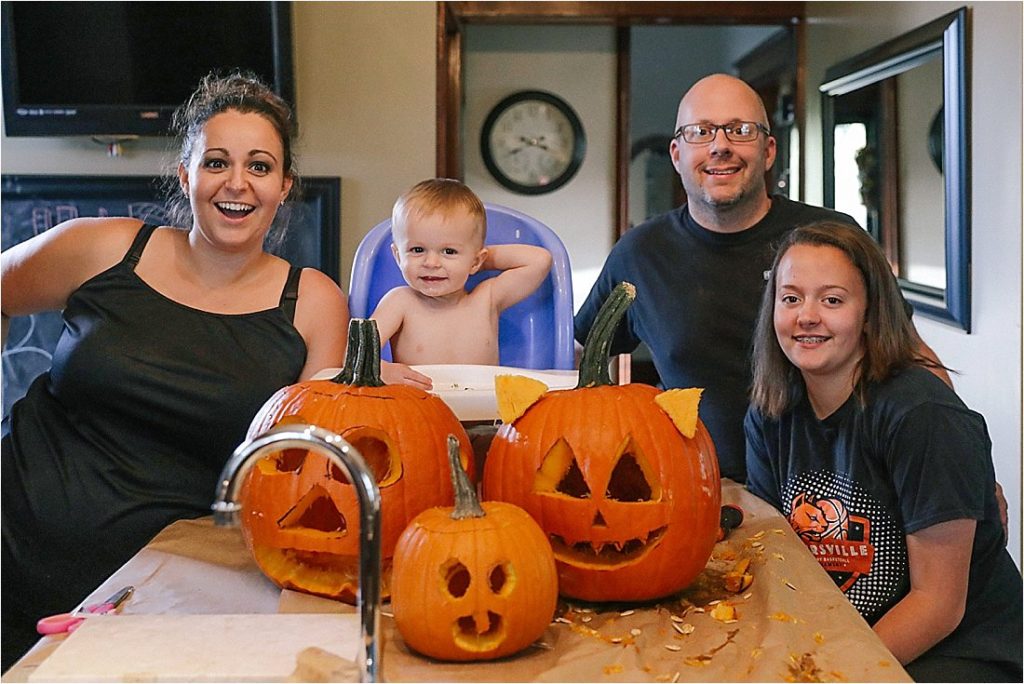 Managed to get one with everyone looking…..using the timer!  WHAT?! 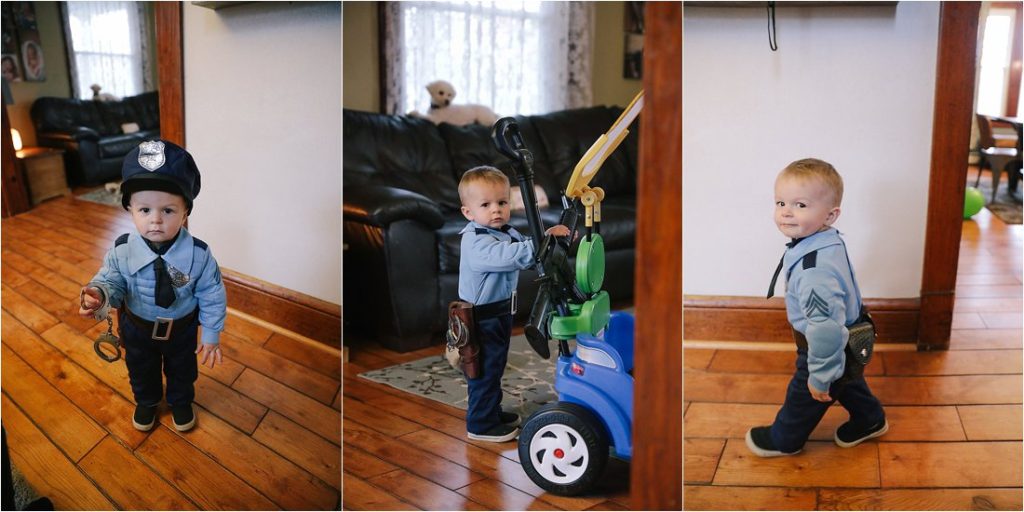 …..and then out came the Police Officer! True story, we actually had another costume for him but he couldn’t’ walk in it so at the last minute we found this costume for $1.99 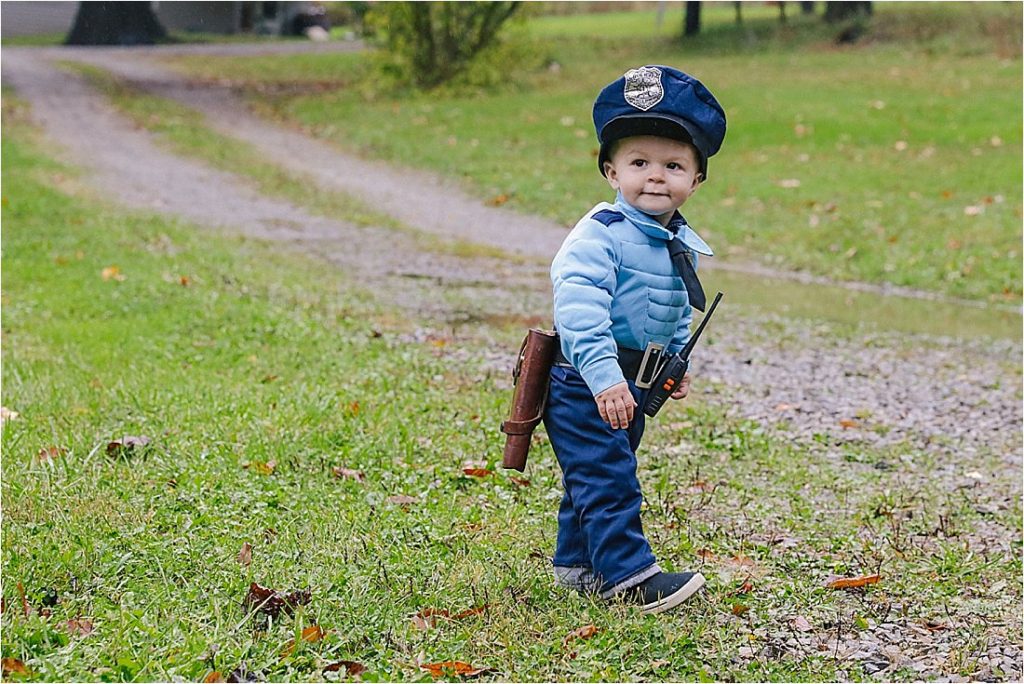 Officer Levi reporting for duty. Did someone report a disturbance? 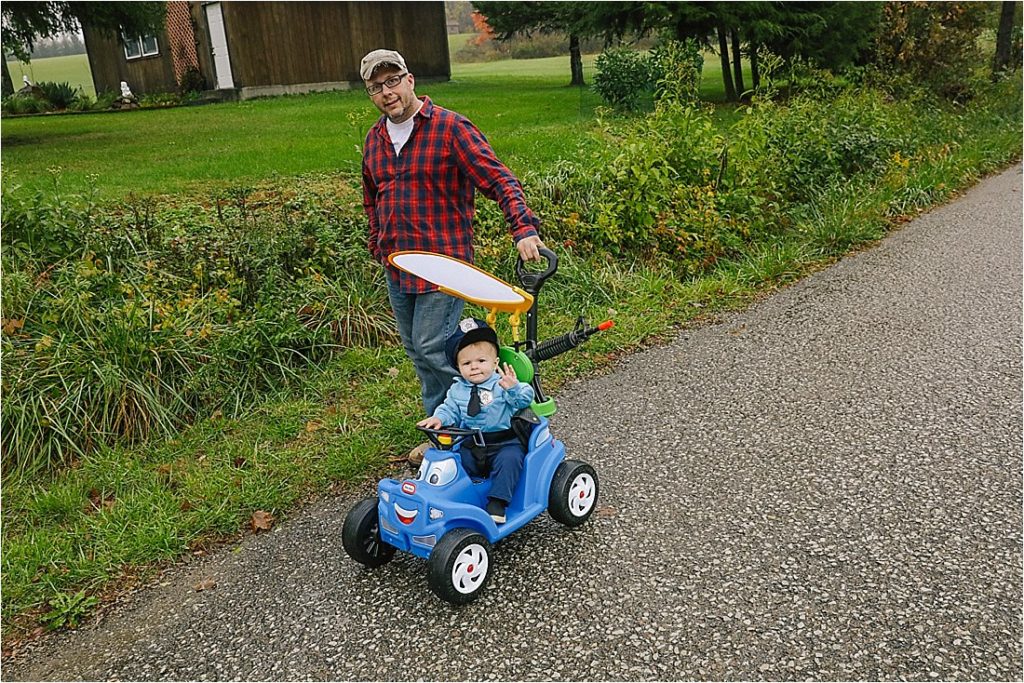 He’s only a year and half, we didn’t really take him trick or treating-let’s be honest, he can’t eat the candy BUT….it’s tradition to go to knock on Grandma’s door. I have a photo of her answering the door like this since Mallory was his age!! <3 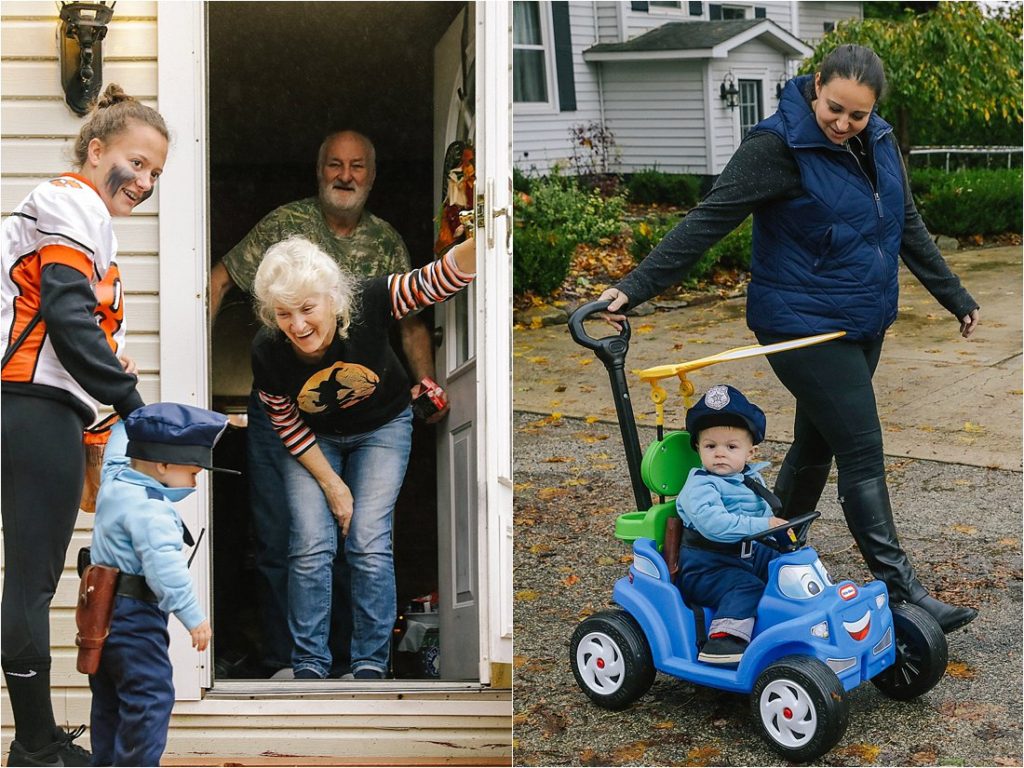 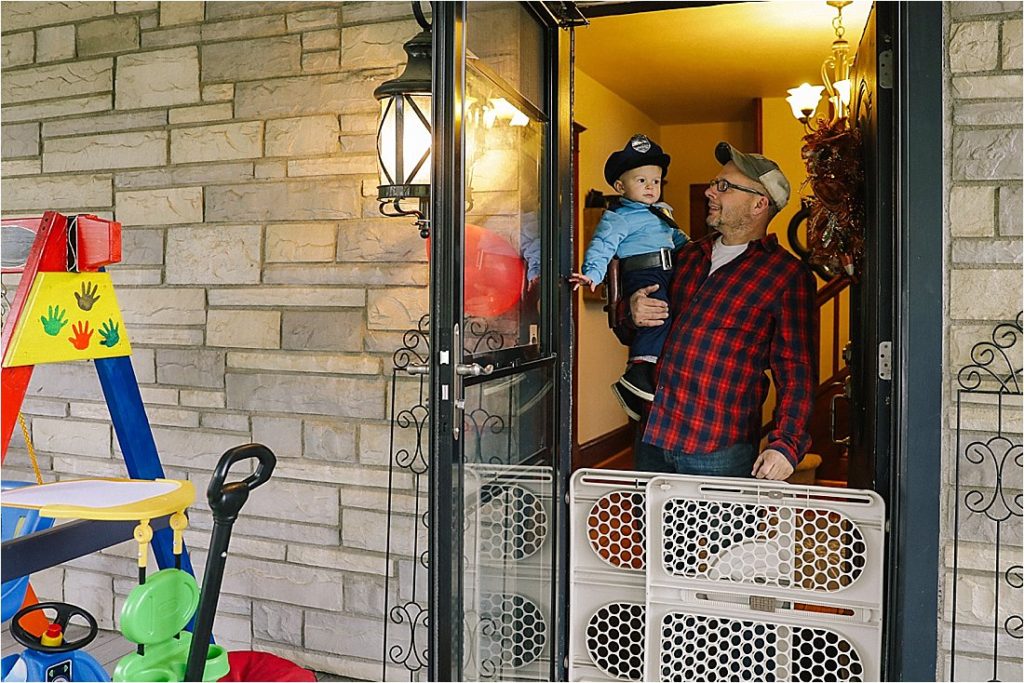 So the cool thing is, since we didn’t take him trick or treating this year, we got to stay home and actually hand out candy to the trick or treaters…..and Levi loved it. He loved it so much he tried to escape to play with them! We had to put up the baby gate! HAHAHA 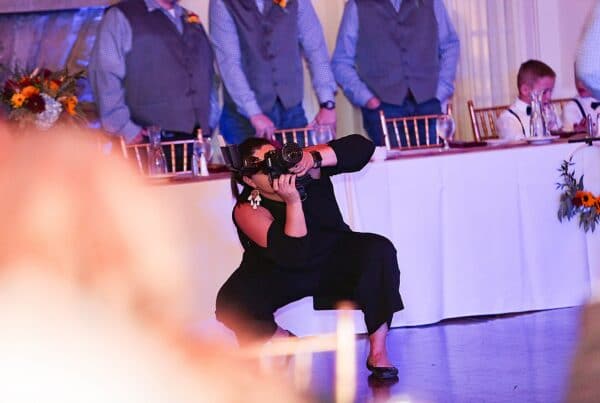 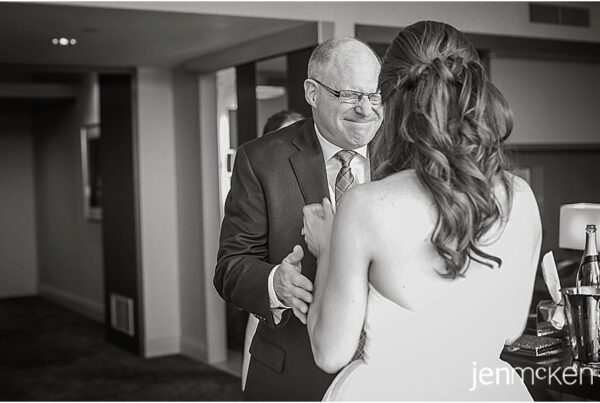 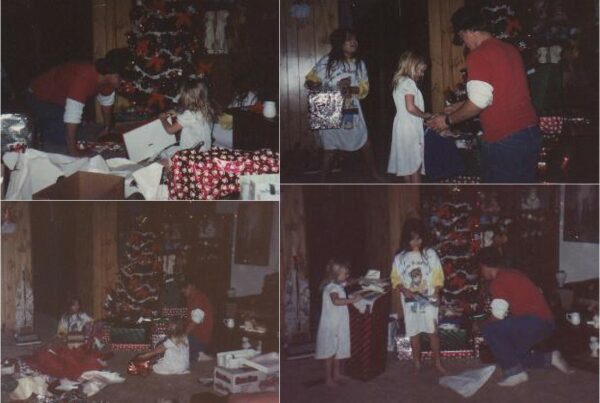