It’s been 13 years since our first date, which we technically dub as our anniversary. It’s crazy to think how fast the time has flown by…..and it’s kinda awesome to look back at how it all happened. I was 19 and still in college Greg was 26 and had his own business. I had to finish school because I was determined to be the first in my family to go to college. Between classes and work, there was just not time for me to drive the 2 hours to where he lived in order to continue a relationship. Back then virtual reality sex was not an option as the software update was a long way from being created. It was a really difficult time and I was desperate to be intimate with him. I had just gotten out of a long distance relationship and didn’t want to go back to that again. But, I knew he was the one when he put in the effort to drive everyday to come see me. He literally blew thru his savings to be with me between gas, eating out, and all the other things that go into “wooing” a girl. But he made it clear he wanted to be with me and that he would do whatever it took to make it happen! ohhh, the stories I’ll have to tell Mallory one day!

Very little people ACTUALLY know how Greg and I met. As a matter of fact, my Mom of all people just found out how we met until a few Christmas’s ago (even though she tells me that she always had a hunch). So it got me to thinking, if my Mom doesn’t know-how many people DO know? I’ve told my very close friends and it’s nothing horrible really …..but 13 years ago it wasn’t quite as acceptable as it is now. My parents knew we “met” at the Mall but that was about all they knew! LOL Because today is the day that Greg and I officially met in person-10 years ago, I thought it would be fitting to tell our story. I apologize up front if I babble….I’m literally giving you the “nut shell” version!

It goes a little something like this: (As cheesy as they are, below are a few of the things we kept from when we first met. I’m all sentimental like that!!)

I had just broken up with my previous boyfriend several months ago (who in all honesty broke my friggin heart-like ripped it out of my chest, threw it on the ground and did a rain dance all over it). It was spring break for IUP and being the broke college student I was, while everyone else went on to their exotic vacation with their bikini’s and tans, I went home to stay with my parents for the week. During the day I would work- but in the evenings I would hop online. My parents had JUST purchased a computer so in an attempt not to drive myself crazy (you know what it’s like to move out of home then go back-tee he he) I would get online and play around in the chat room. THAT my friends is where Greg comes into play. Get ready to laugh: his screen name was “the_rock_in_pa” and mine “jenny_5582?. We met in a PA chat room on Yahoo. Pre-Facebook, pre-Myspace, pre-e harmony, etc…..a good old fashion chat room. (Nut shell version) We chatted for about a week online, sent emails back and forth and then finally talked on the phone for weeks. This guy was pretty cool, we had tons in common and he wanted to meet me………gulp….in person! The cool thing was he was such a gentleman when we chatted and talked on the phone. I was used to the perverted college boys who would ask for nudes and stuff five minutes after saying hello. I used to tell them ‘if you want good nudes then search for Preeti & Priya young, but don’t ask me’. Talking to him was like a breath of fresh air. Keep in mind, this is when Internet dating wasn’t so common-only weirdos did it. So there we were making plans to meet up 1/2 way between his house and mine (although I think he drove further) at the Monroeville Mall. I thought, it’s safe right. I mean if he’s some kind of perv, I could always scream and people would hear me!!! haha! 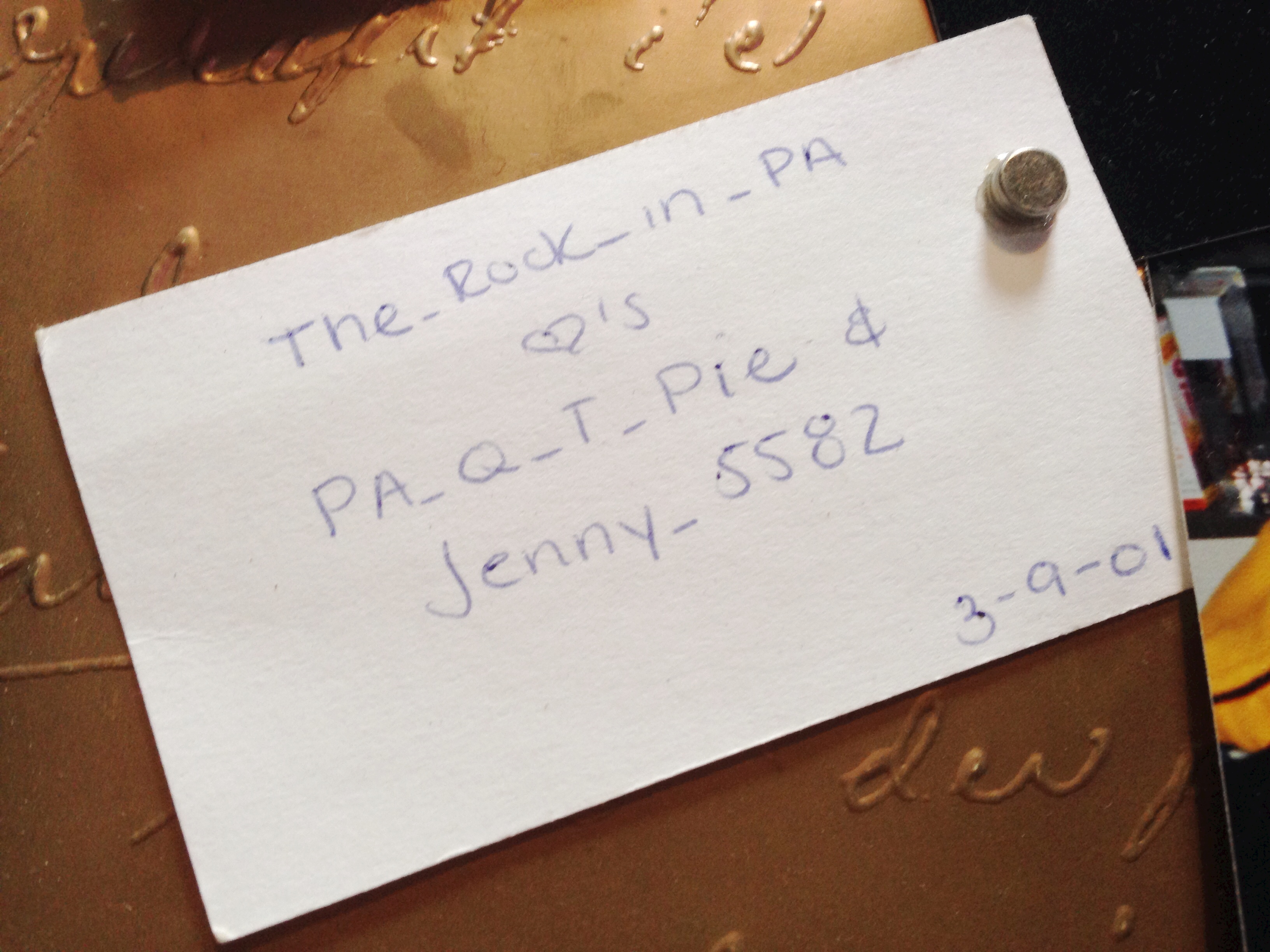 These were our screen names at the time….and even to this day when Greg gets me a card for my birthday or any other holiday he signs it with “the_rock_in_pa”. Other random fact, our very first Christmas ornament was a computer ornament from Hallmark!

I arrived first so I sat on a bench in the Mall waiting to laugh at myself for being so stupid for “falling” for this when Greg came around the corner. (nut shell version) We went to a movie, had dinner and he made me laugh…..we had a great time but the truth was, I was still in college almost 2 hours away and I had just gotten out of a long distance relationship so I wasn’t sure how it would work. I couldn’t drive to see him-I had to focus on school. The next day, I got a phone call from him asking if he could bring a friend to come visit me at IUP. Literally (no exaggeration) since THAT day forward, we spent every day and night together. He owned his own business so his schedule was a bit more flexible than mine. He would spend the night with me, get up in the morning and drive 2-3 hours (depending on traffic) to drive home and work, then at he’d hop back into his Jeep and drive the 2-3 hours back to IUP to stay with me. I lived in a dorm at the time and my room mate was the bomb diggity (HI VICKEYYYYY!!!!)……Greg practically became our third roommate. I knew he was “the one” when I took him to my sorority’s formal (yes folks I rushed for a sorority-no folks I am no longer *IN* the sorority. TOTALLY wasn’t for me!!) Anywho, he was my date to the formal in Canada. While all the pledges and sisters were out at the bars we decided NOT to join the crowd. So instead, we walked all over the streets in Niagara Falls, Canada and ended up in this rinky dinky little bar. (The photo below is from that night) We laughed, we joked and I think we “fell in love”. Almost exactly 2 years to the day, he proposed to me at Niagara Falls. 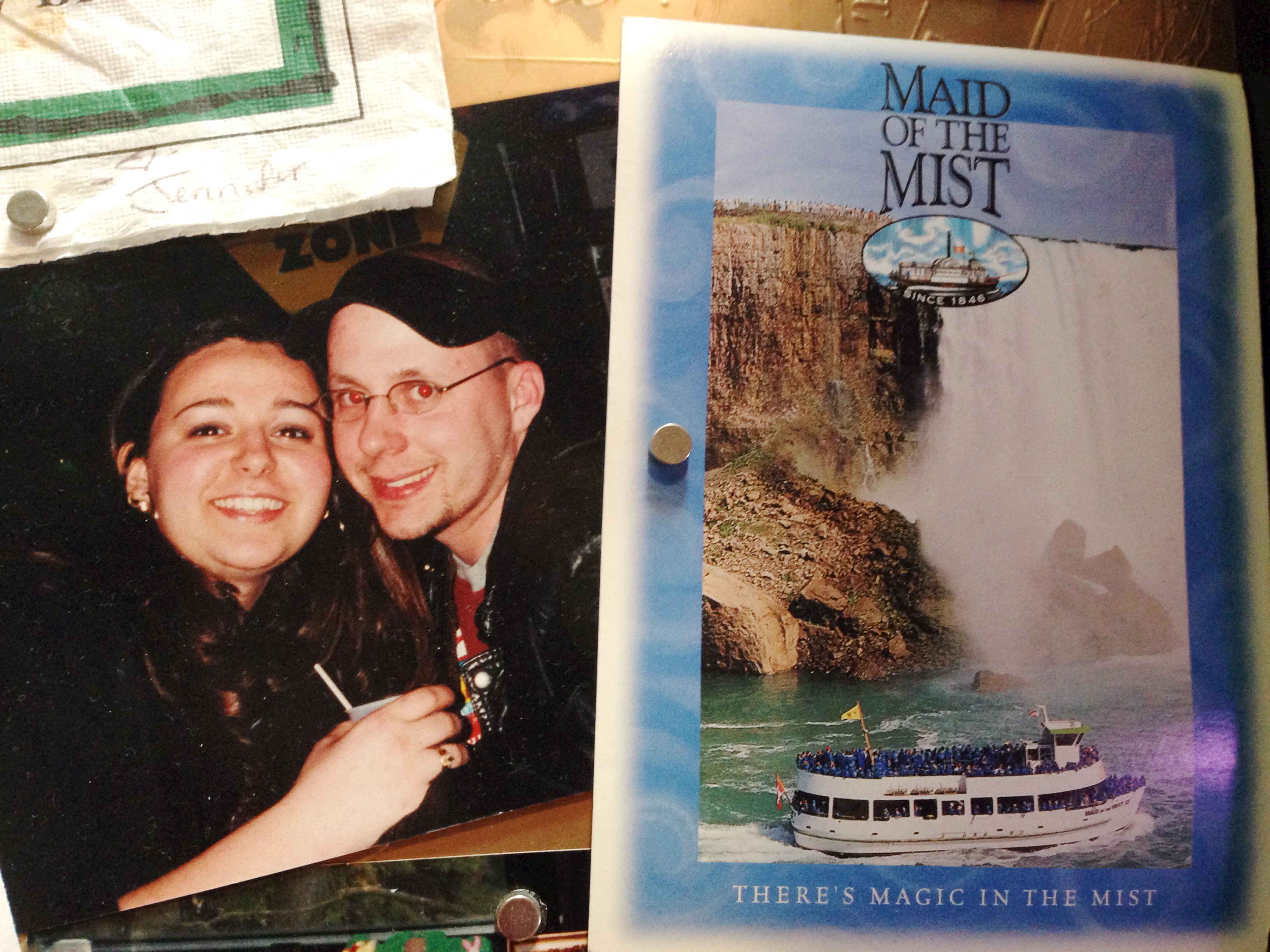 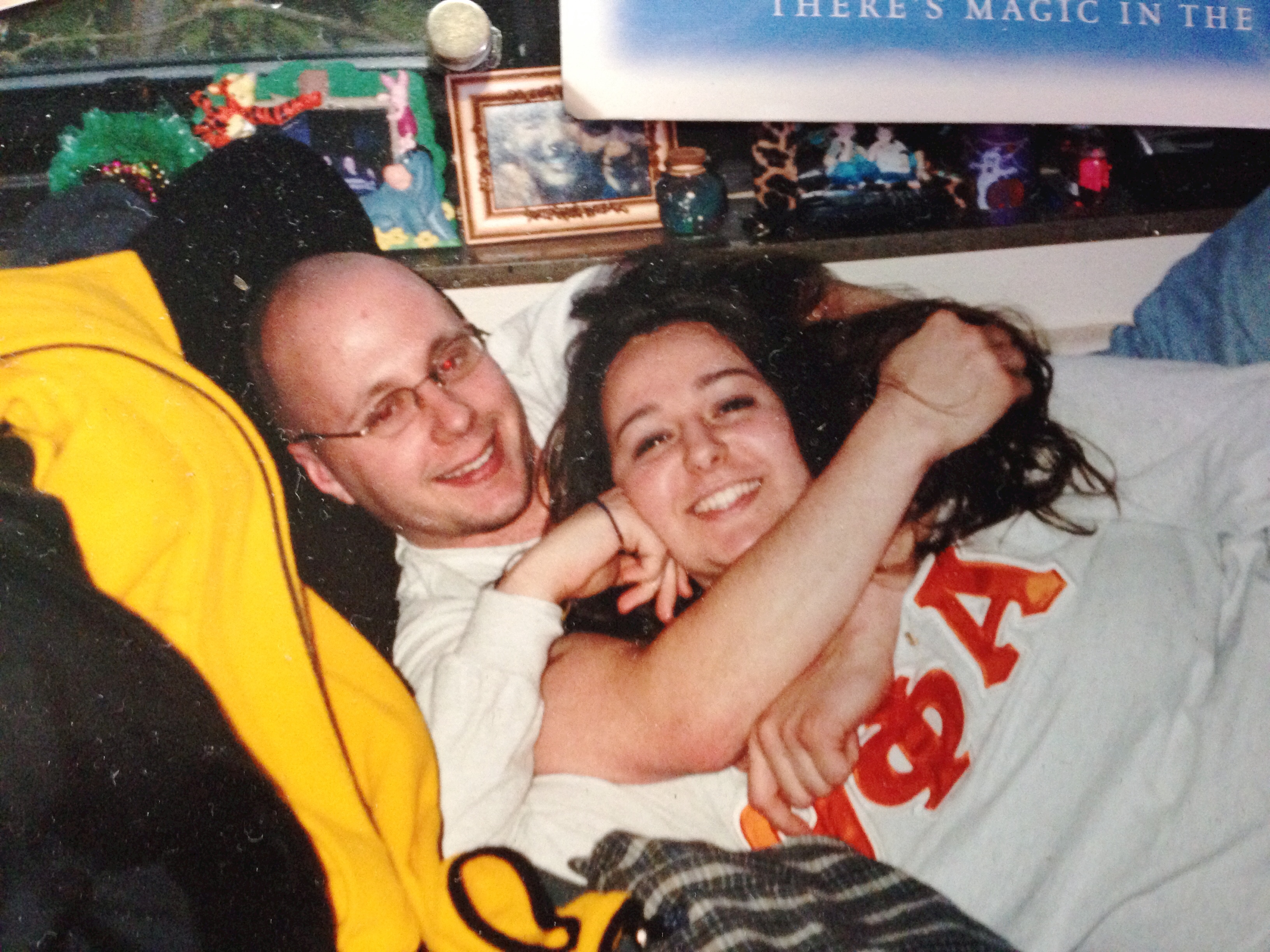 This was taken in my dorm room. He spoiled me back then and he spoils me today! I found a good one!

It wasn’t long before the semester was over and we were searching for apartments together-the rest is history! He was my cheerleader thru college, my rock (no pun intended!) when things in life went wrong, he is my partner in crime and my baby daddy! He’s so good to me and he sets such a high standard for how Mallory’s husband should treat her one day….and I sure am one lucky gal! 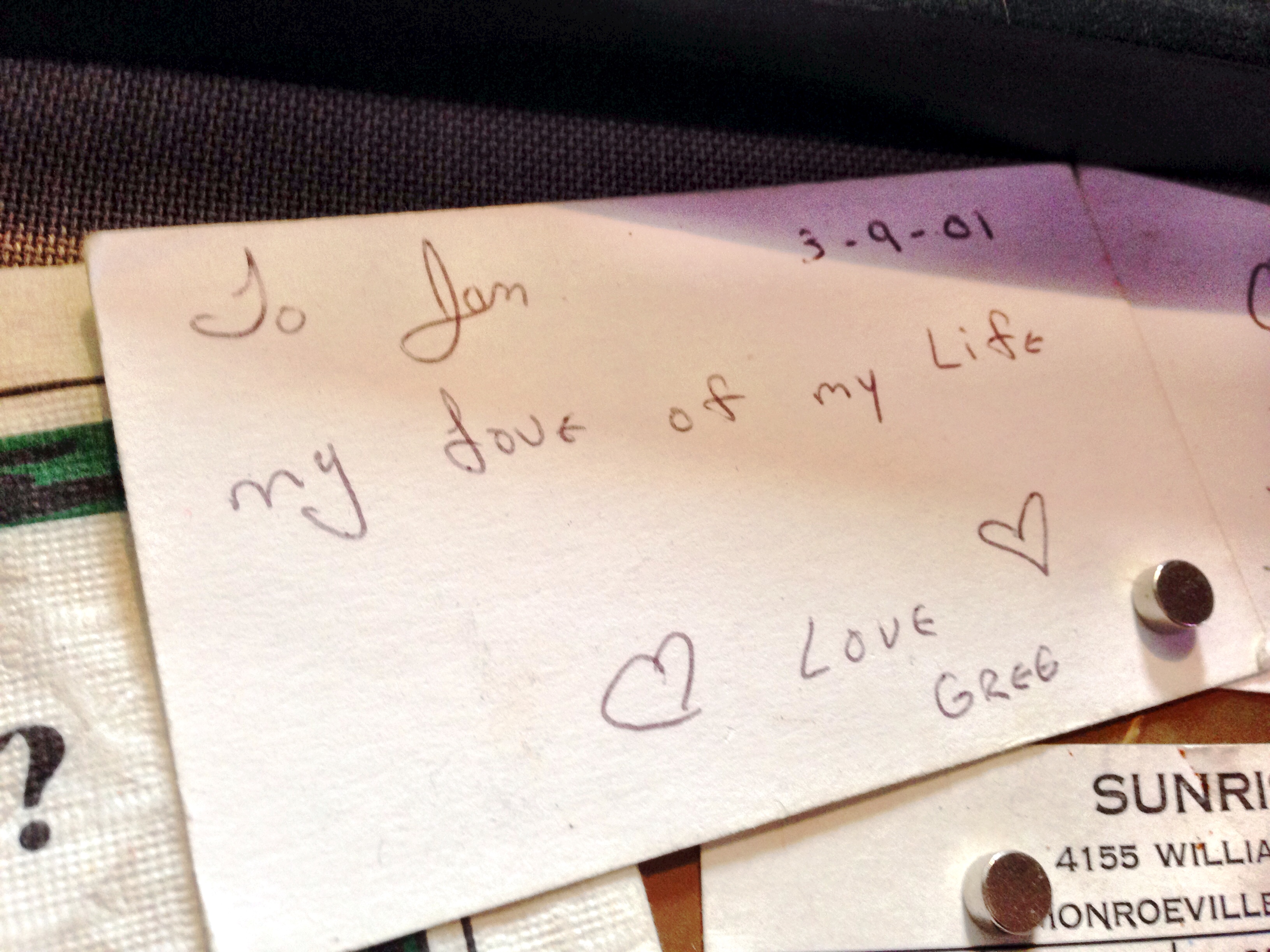 This was from our very first date. We were waiting for our waitress to bring our dinner to the table and he slid this across the table to m after weeks of talking on the phone before we first met. I’ve kept it ever since.

And for the boyfriend in college that broke my heart…..thank you SO VERY MUCH! Happy Anniversary Baby Daddy! <3 I can't wait to see what adventures we get into next! 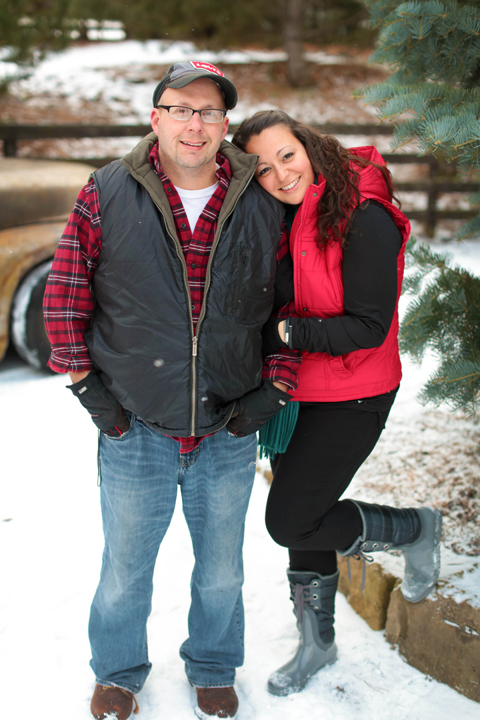