I love these guys! I love that they picked locations that MEANT something to them, I love that she writes letters to her future grandchildren and I love that he taught her about the stars…which essentially leads to how they “may” have met! haha!

How They Met:
“Neither of us remember the first time we met. We were either completely oblivious to each other or the “time slows, music plays and everything makes sense” guy fell asleep at the switches. When someone asks the question, we confess a floggy and mundane truth that it was most likely in passing at an all staff meeting. It then took two years of ignoring each other as we judged the same science fair projects, worked for the same museum and socialized with the same friends before our story began.

In October of 2012 our mutual friends Kevin and Leah were getting married and they asked both of us to be in their wedding. The couple tried for months to play matchmaker and set Angie up with a different member of the wedding party. Though they now claim it was just a decoy to secretly push us towards each other in protest. Seeing as the prospective guy lived in another city the introduction had to wait. When the evening of the rehearsal dinner arrived, Angie invited herself to the testosterone fueled bonfire in Kevin and Leah’s backyard. She sat awkwardly in the cold wondering why she didn’t just go home. That’s when Rob took it upon himself to make her a hot beverage (hot toddy; a favorite) and teach her about the stars above with not one but two telescopes. The next day we walked down the aisle together. We socialized with guests in the receiving line and bantered with each other like old friends. During photos Rob asked Angie for permission to touch her shoulder and she swooned at his gentlemanly sensibilities. The night had dancing, laughing and maybe a private first kiss on the balcony. Three days later we had our first real date in Market Square for lunch and coffee. ” – Angie 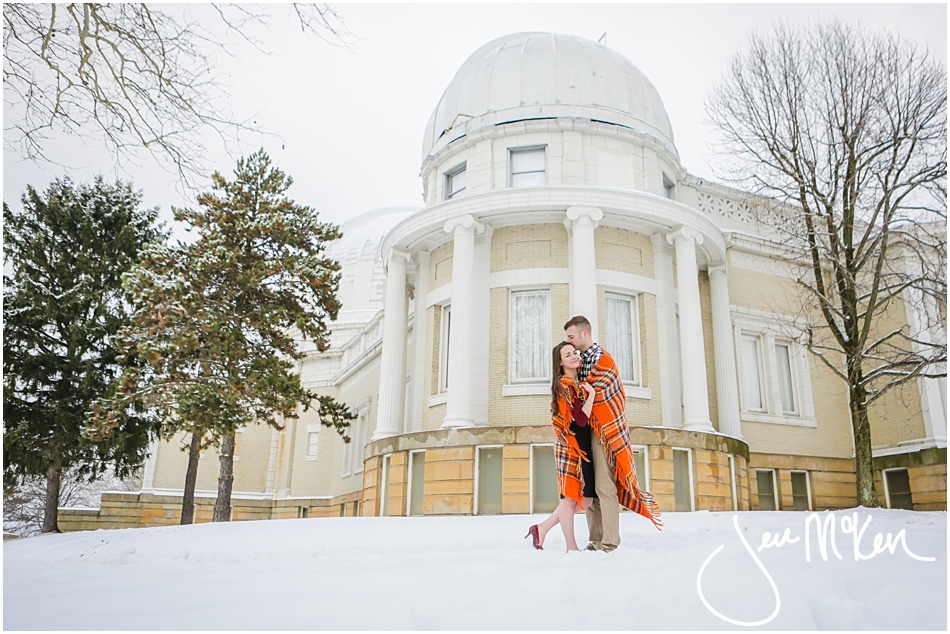 And yes folks, she is ROCKIN red heels in the snow!

“We like to be outside and active. Since we’ve been dating we have completed a metric century on our bikes, gone sky diving, rock climbing in Shenandoah National Park and play softball. When temperatures are sub zero like now, Rob plays his guitar while I sew”- Angie 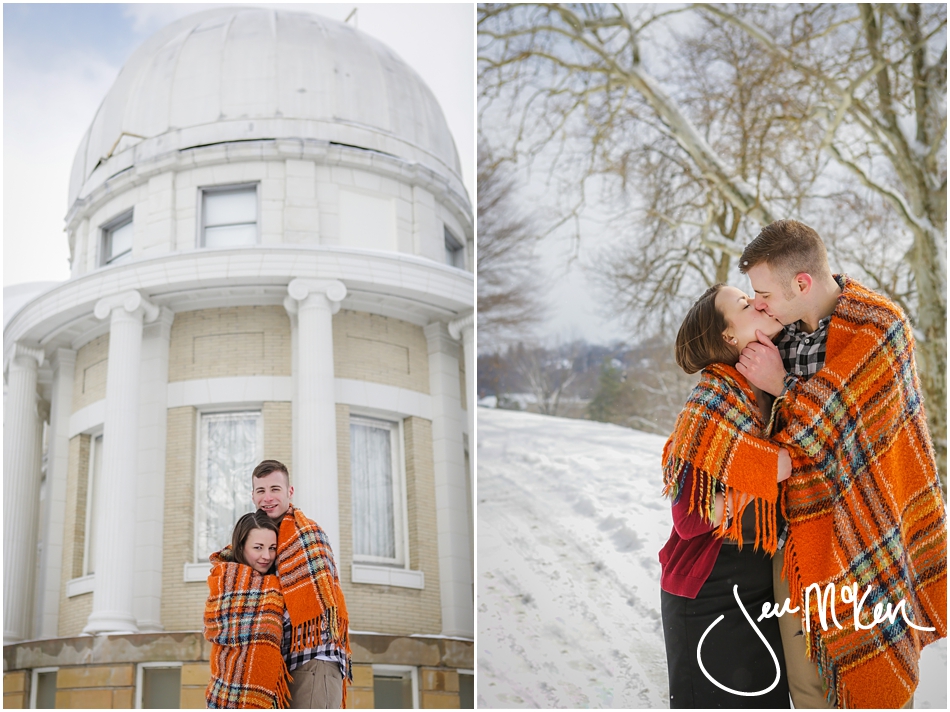 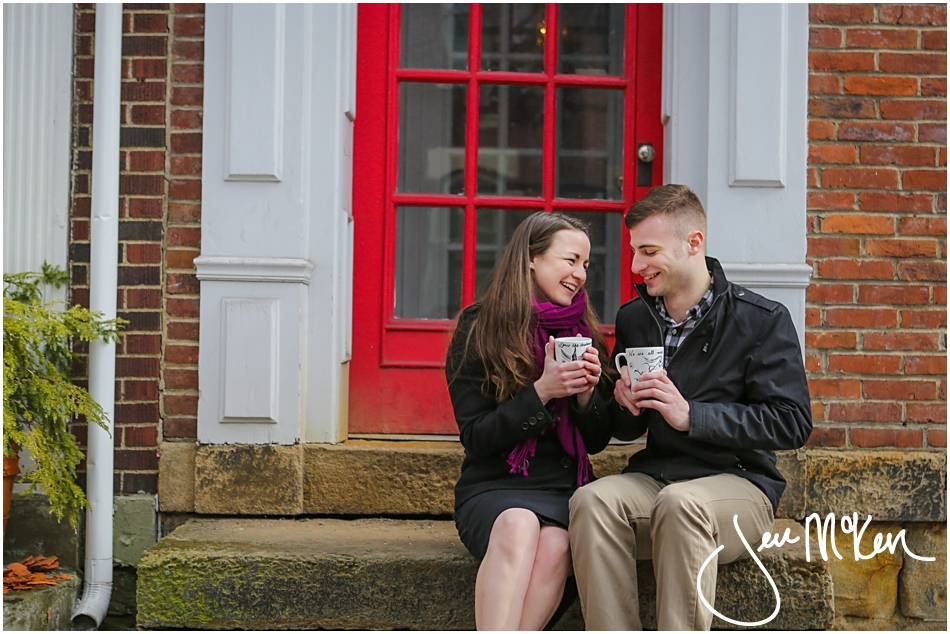 The Proposal:
Angie traveled to Huntsville, Alabama for ten days in early November. This left Rob with plenty of free time to shop around for the ring. It also gave him the opportunity to appear at the Iwaniec homestead early on a Saturday morning. Once he recounted his two months of diamond research, he asked for Mr. and Mrs. Iwaniec’s permission to marry their daughter.
On November 9th, the day after Angie’s return, we traveled to Leechburg, PA for a “Friendsgiving” dinner at the home of Angie’s brother and sister-in-law. We set up a telescope in the front yard before dinner. This was the same telescope Rob had used to woo Angie two years earlier. We also happened to be less than a mile from where our story began at that backyard bonfire.
As she hauled the cases from the car, Angie thought to herself wouldn’t it be funny if there’s a ring in one of these? The sun was still ablaze when the telescope was ready so Angie went inside to make coffee. Rob quietly asked Kevin to take pictures when the time came. Then a few hours later Rob invited everyone to go outside but being completely oblivious to the real show only Angie, Kevin, Leah, and their toddler son Thad took the invitation. Angie looked through the telescope as Rob began to ask nostalgic questions and profess his love. He said “Did you miss me? I missed you. You’ve been gone for ten days and I realized that I don’t need anyone else.. Can you see what’s blocking the light in the scope?” He then got down on one knee and asked Angie to marry him. Angie responded by saying yes and jumping three feet in the air repeatedly. She was too in shock to see the ring so Rob had to ask “Do you want this?”. Her response to that was “Shut up! Can you get on your knee again?”. We then went into the house and surprised the crowd with our announcement. The whole event was a surprise bursting with love and excitement. 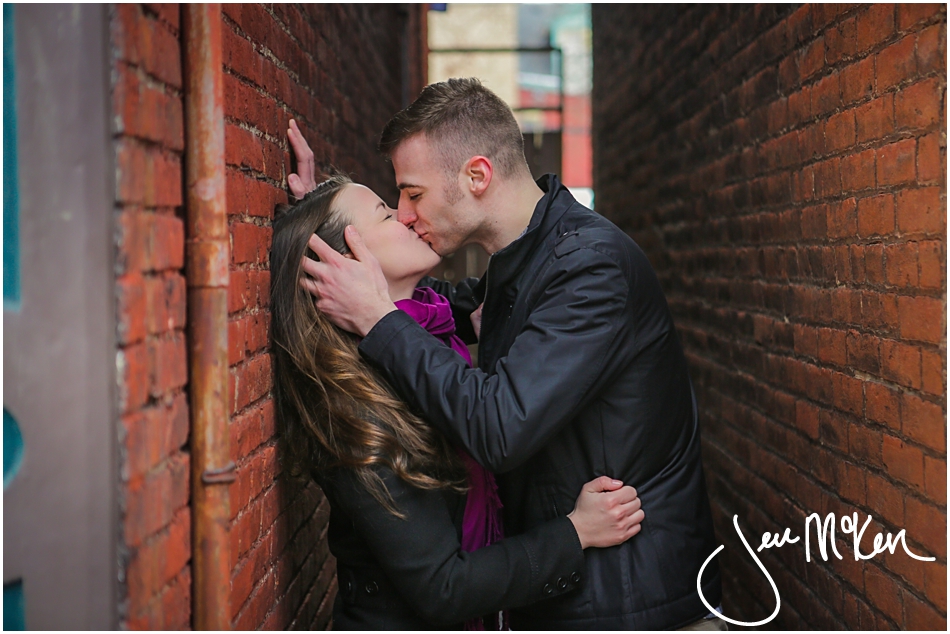 If your relationship had a theme what would it be?
“Lifelong friendship. We are first and foremost friends. We not only love each other but we like each other. When we are not spending time with each other we feel the other’s absence. I’ve always heard that when you see someone’s life that you want to watch for the rest of yours, you should make them a priority.”- Angie

“I finally broke the “I love you” ice a few months in after I realized, in the paper towel aisle, that I would really like to go grocery shopping with Rob. If that’s not love what is? Here we are two years later and we can’t imagine living our lives with anyone else!” -Angie

Tell me a funny story about the two of you!
“After our first New Year’s Day together Rob was putting leftovers from dinner in the refrigerator. Angie was also in the kitchen looking at her phone when Rob went to pick up a pile of filled tupperware. He misjudged the edge of the counter and dropped the very large container of brown gravy. It exploded on the floor at Angie’s feet and she was covered from head to toe. Rob wiped off her face as she stood in shock and we laughed for twenty minutes.”- Angie

Tell us 3 random facts about each other:
Angie: I have traveled to 10 different countries, I can juggle, and I can instantly create a song for any situation or object.
Rob: I have bicycled from my house in Pittsburgh to Washington D.C. in four days, I sing and play guitar in a jam band, and I take vacation during the summer to be a camp councilor.

You guys…..aren’t they amazing!! You’ll be seeing lots more of them in September when I shoot their wedding! It’s going to be AMAZING…I can feel it! 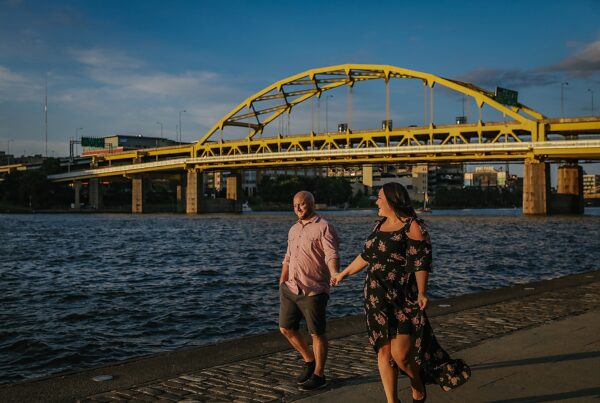 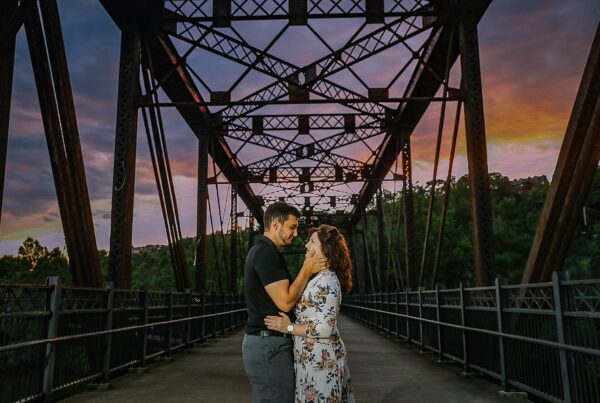