It took many hours to wrap all of those presents and only 15 minutes to UNwrap them. But as I sat in the foyer surrounded by all of the wrinkled paper and tape, in my “comfy clothes” (you know, incase I eat to much) and my fuzzy socks….and it’s hard not to smile. I take a minute to look around and immediately get anxious with the mess I’m going to have to clean up (little pieces to all the toys, paper, ties from holding the toys into their packaging, etc.) but I quickly remind myself….It’s Christmas-just relax! That paper I mentioned…yeah, there’s still some on my floor, the little pieces are still ALL over the house and Mallory’s room looks like it has exploded…BUT soon everything will be back in it’s place and I’ll be wishing it was Christmas morning all over again. I’m convinced Christmas should be awarded extra hours in the day.

Like many of you, we have to split our time up between everyone on Christmas day and it makes for a stressful one at times. I’ve been doing this ever since my parents divorced all those years ago. We open gifts at our house in the morning with Greg and Mallory and then drive up the mountain to my mom’s house to open gifts there…then back down to my dad’s house for a few hours and we finally end up at Grandma’s. I love it and hate it all at the same time. I feel like I never get to spend enough time with each side of the family and often times once we arrive to one place someone has just left to go to their other relatives house and we miss seeing some of our cousins….so next year, I’m determined to split up time between Christmas Eve and Christmas Day so that we can relax and have a little less rush-rush-rush. But with all of that being said, we always come away from Christmas day with some funny, sometimes, very entertaining memories. And this year I have at least a handful I’ll remember for a long time.

While we were in Ireland this past October, I had one (of many) goals. I wanted an Irish Claddagh Ring from the town it originated from. Claddagh Rings are probably the most culturally rich pieces of jewelry ever recorded in history-the way the ring is worn is deeply rooted in the Irish tradition. It was originally made in a small fishing village in Ireland near Gallway over 300 years ago. If you are interested in reading more about the history click *here* 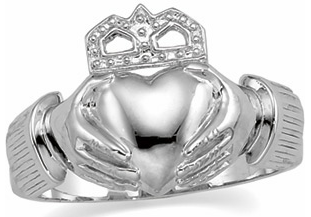 ANYWHO….in my mind, we would travel to this small town and I could purchase my ring directly from the place it had originated. Sure we saw many places that sold the ring along our journey in Ireland but NO…I was going to buy mine from the small fishing town I had read about. Long story short, on our last day we drove 2 hours out of the way toward Galway in order for me to buy me the ring. The whole way there I was so excited, I mean how many people could say that they bought their Claddagh Ring in Claddagh..not many! When we arrived in Galway, we began asking the locals directions for the small town of Claddagh and it was then that we realized we may have a hard time than we thought. In a nutshell, they said that the AREA of the town still existed but that the town itself was no longer there. What it boiled down to was that we had gotten there relatively late in the day and that most of the shops that would have sold the rings would have been already closed and the area that was once the small town pretty much doesn’t exist any longer <insert BIG HUGE SAD FACE> Disappointed, we hopped in the car and headed back to Dublin for our VERY early flight the next morning. I was so bummed that I had waited all that time during the trip banking on the fact that I would buy a ring in that one specific town and now I was left empty handed……………but then on Christmas morning, Greg hands me a box with…YEP, a Claddagh Ring. I know it’s not from the town like I had originally planned but he know it meant a lot to me …and that’s the best part AND now, I have a story to tell! 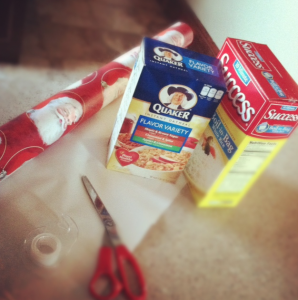 In an effort to both be resourceful AND funny, I wrapped everyone’s gift cards this year from boxes in my pantry. First because I wanted them to have something to open and secondly because, I wanted to see everyone’s reactions. It was priceless! I’m the oldest of 8 siblings. Now hold your horses before you go thinking I have “busy” parents, I’ll explain. My parents are divorced so between myself and my half brothers and sisters and my step sisters (whom I consider sisters) there a re 8 of us. So Christmas’s can be CHAOS..but that’s why I love it! So as I handed my younger brother his present to unwrap, he sat holding a box of perogies! He sat for a moment before looking up to see my face and then realized that it was a joke. Inside was a gift card to the local Game Store. I think it’s going to be a yearly thing…..raiding the pantry for reusable boxes. I mean, you can’t get these kinds of laughs at the grocery stores! tee he he 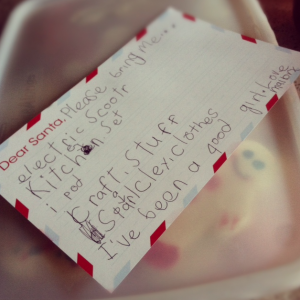 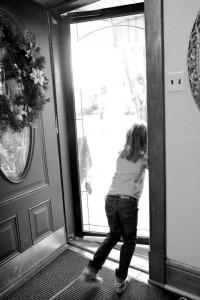 When Mallory wrote out her Christmas list this year she had only 5 things listed. They were an electric scooter, ipod, craft stuff, kitchen set and sparkley clothes. So Christmas morning when she woke up, she snuck downstairs before coming into our room. She came running up the stairs bursting with excitement….Mom, he brought more than 5 presents!!!! She had actually went down and counted them! BUT…her scooter wasn’t there. She simply told us, “My scooter isn’t there though, but maybe Santa thinks I’m not old enough for one just yet”. So as we are opening her gifts she got everything she asked for (except a much cheaper version of the ipod, I don’t feel my 7 year old is age appropriate for that just yet) except for her scooter……but out of no where Gracie starts barking at the door. Mallory ran to the door and immediately saw a nice shinny pink scooter on the porch. She jumped up and town for a minute before busting out the door and hugging the handle bars. It was the cutest thing EVER! She didn’t think she got a scooter……but when she found out she did..she was over the moon excited! And this mama is stocking up on bandaids and Neosporin…that thing has some power! LOL 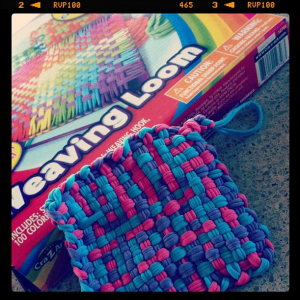 When I was younger-maybe 8 or 9, I remember my grandma had gotten me a plastic weaving loom. I made sooo many  pot holders for people that year for Christmas. I came across a weaving loom a few days before Christmas and I HAD to buy it for Mallory for Christmas. She and I sat on the couch Christmas evening making our very own pot holder just like Grandma and I did. It’s not perfect, it’s quirky…just like us!!!

Those are just to name a few. Over the next couple of days I’ll go thru the actual photos I took….maybe I’ll share a few of those on the blog! I hope you all had a wonderful Christmas and created lots of memories! Now excuse me while I go pull paper out of all the nooks and crevises of the house in an effort to get “de-paperfied”! LOL 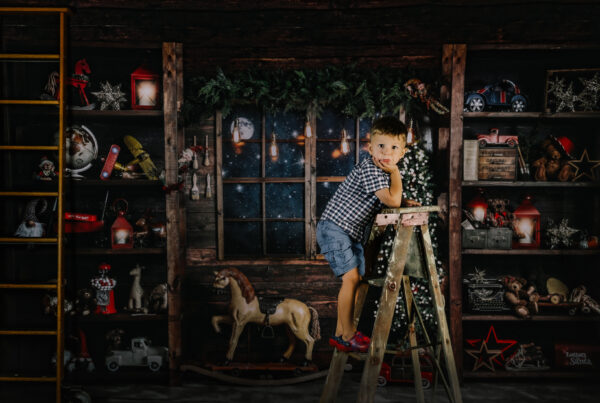