Hit enter to search or ESC to close
Family

What’s really ironic is that as I type this, I got a notification that she was commenting on one of the posts….and that’s typical. She’s been one of the most supportive people (even before I knew her) always commenting the most kindest, positive feedback on complete strangers images. But the funniest thing is how we actually met and became friends. You see before I even moved back into the Blairsville area, I remember getting an email from her saying how I just HAAAAAAAD to shoot her family photos and that she wanted to have them taken before her husband’s next deployment…She knew it was a matter of time before her husband, Sean-Command Sgt. Major US Army National Guard would be preparing for his 2nd deployment. This time to Afghanistan and she was so worried about being able to get a session that she wanted to literally book it 2 years ago! haah! I told her she’d have to call back when it got closer to the date! haha!!

Fast forward two years and the time had finally come….she calls to book a session and we agree that I’d ride up with her to the airport.  I told her she had a date! THEN, she showed up with a bouquet of flowers for “the date” and off we went to Johnstown. We chatted and laughed the entire way there and it wasn’t until we pulled in and were ready to get out of the car that I realized it………I HAD FORGOT MY CAMERA AT THE STUDIO! Yes, I had forgotten my camera after driving almost an hour to get to the location. Luckily, Greg was able to meet us half way but I was so insanely embarrassed……I MEAN EMBARRASSED AS HELL! That was the first time I had ever done something so stupid….yet she was so gracious about it. As she said, everything happens for a reason and we ended up with the most gorgeous sunset for the photos….you can check them out there: https://jenmckenphoto.com/2012/08/livolsi-family-johnstown-pa-airport-family-photos-jen-mcken-photographer/

Ever since that day, we became good friends and it wasn’t soon after that when she posted on her facebook status that she was looking for a “work out buddy” to go to some of the new classes at the local community center. I said, “I’ll go!” and ever since January of this past year, we have bonded over sweat and exercise! hahah! In all seriousness, I owe a lot of my weight-loss to her because having someone to support you and “talk you off the ledge” when you’re ready to eat a whole tray of brownies is so invaluable! This whole weight-loss deal has taken place while her husband Sean was away on deployment for almost a year. She wanted to surprise him with her new look and thru the course of us getting healthier, we’ve talked about the day he would come home…….and I knew I just had to be there to document that for her. I know how challenging it has been not having her husband near for 270 days and seriously it’s the least I could do for them! It’s been the plan all along……until we found out what day he was actually landing to come home. Due to security reasons, they can’t give a concrete answer as to when their flight would be so all year I knew I’d be on “stand-by” to shoot the homecoming…..and then we found out it was going to be on a Saturday ….a Saturday that I had to shoot a wedding…and my heart sank and we both had to come to terms with the fact I wouldn’t be able to be there.

Remember…everything happens for a reason-WELL…..it just so happens that I was shooting a wedding only a short distance from the airport he was arriving at and that his flight wasn’t going to be landing until 9:50pm. I was scheduled to be at the wedding until 8pm (but I ended up staying until 9 to cover some last minute details) and as we were packing up the car, Greg and I looked at each other and said, “Let’s make this happen!”. So after a 12 hour wedding,  we sped to the airport for a secret mission of our own, rushed thru security and up to the gate 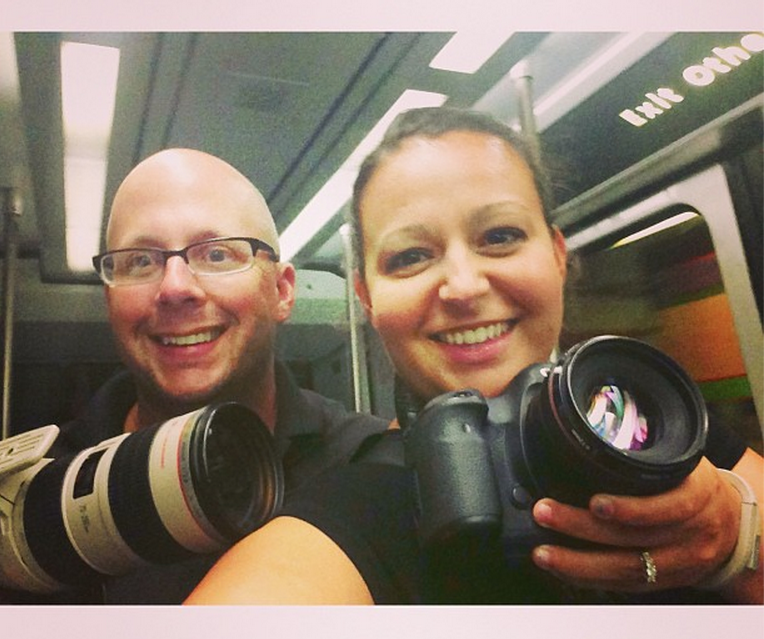 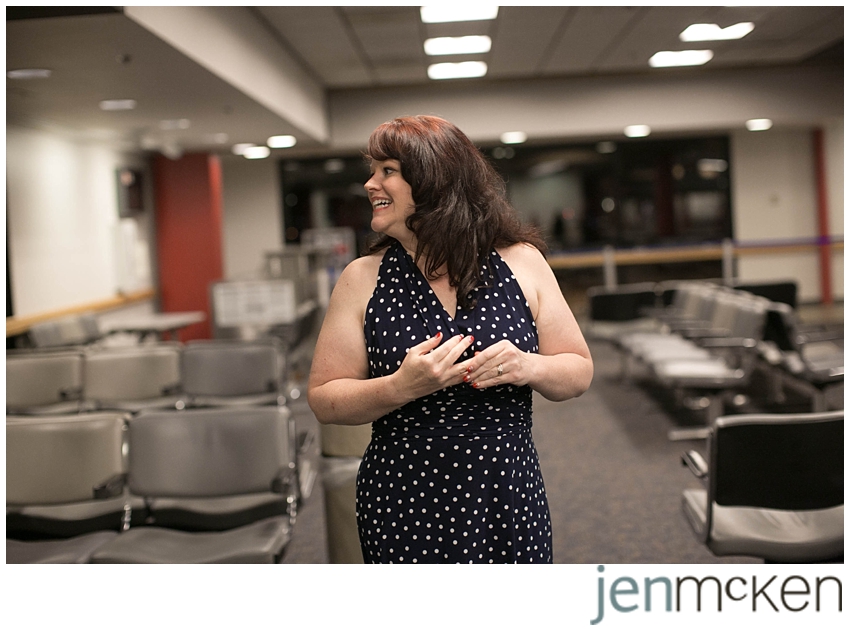 When she gets anxious she plays with her hands….. tee  he he! 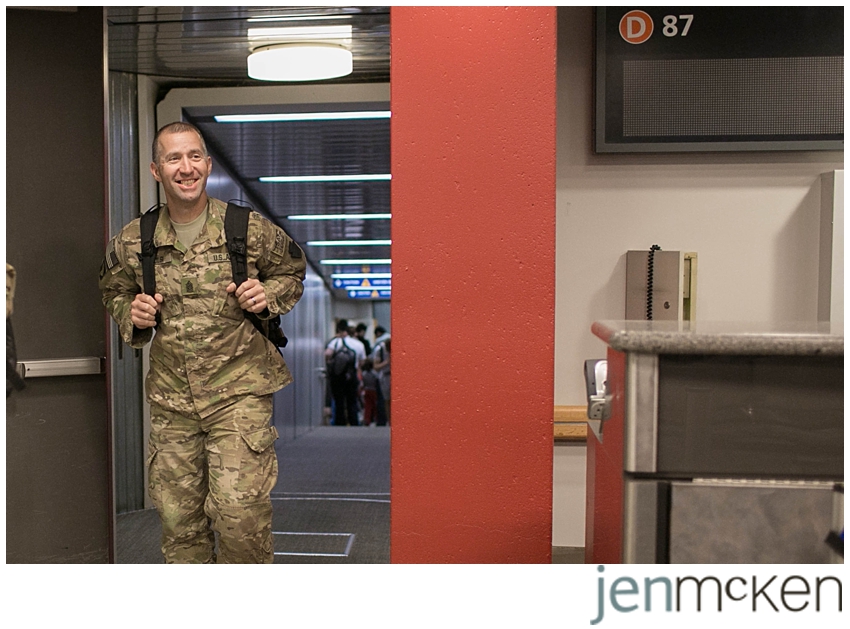 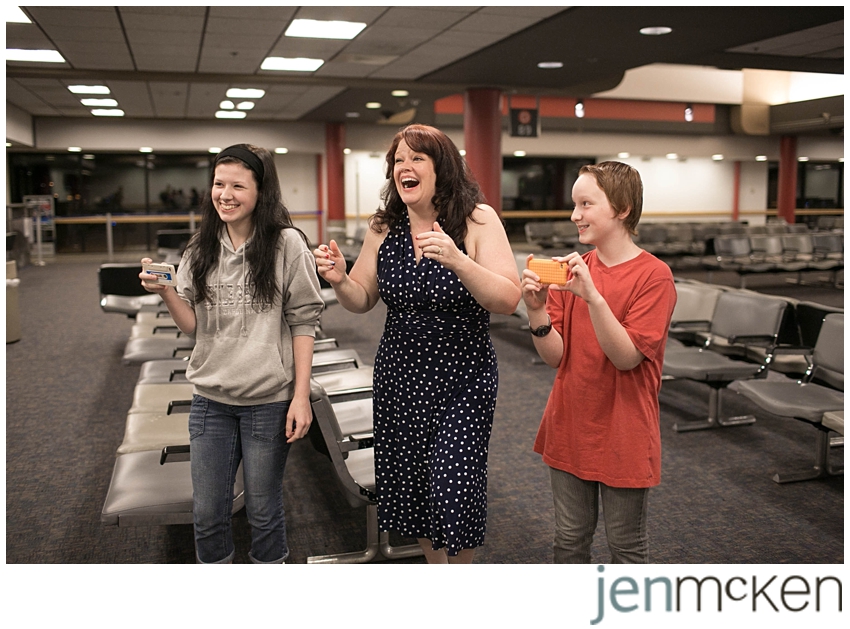 This shot made it sooooo worth the rush to get there!!! 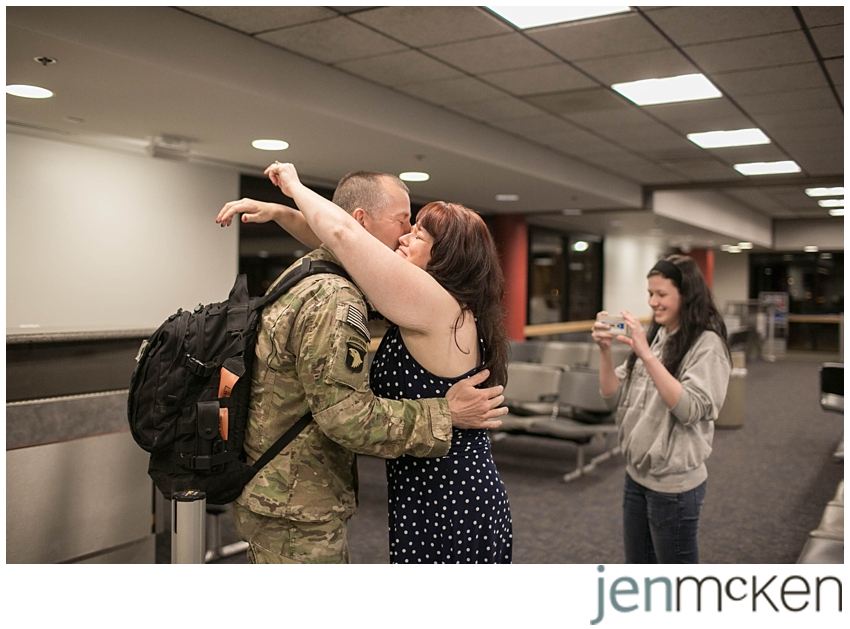 This just melts my heart! 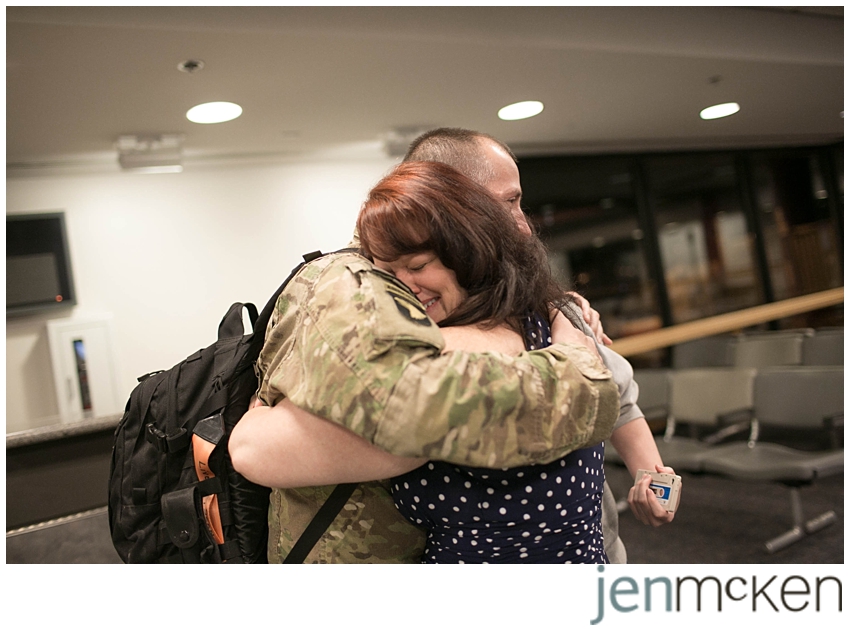 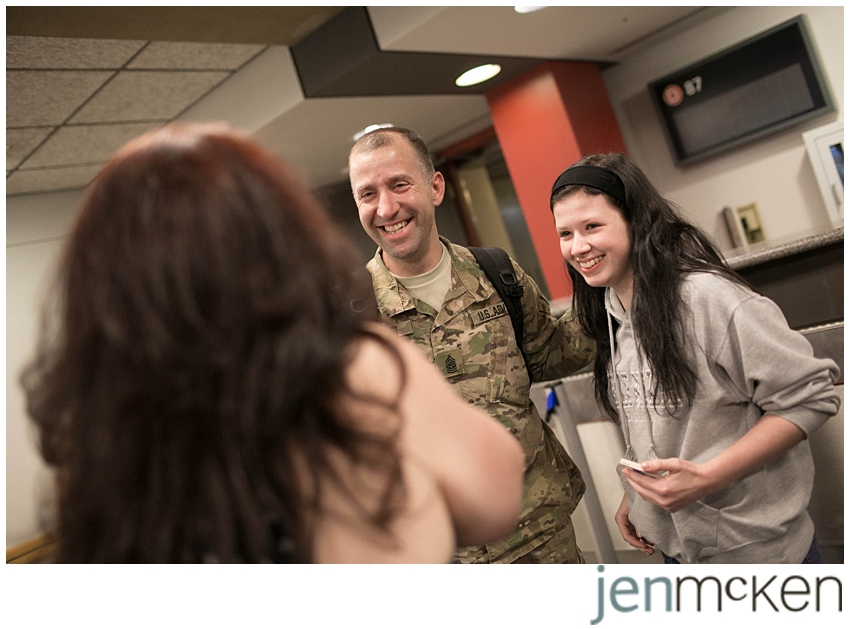 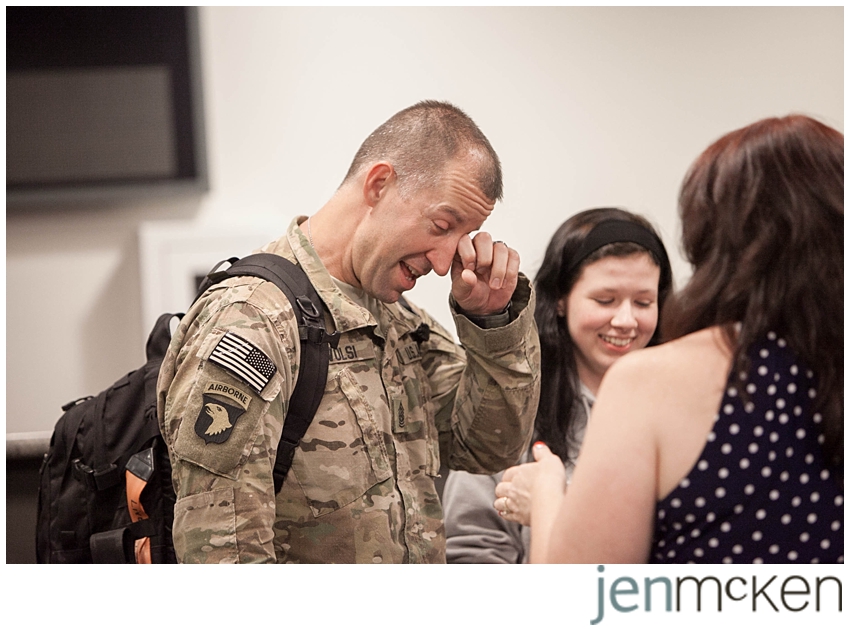 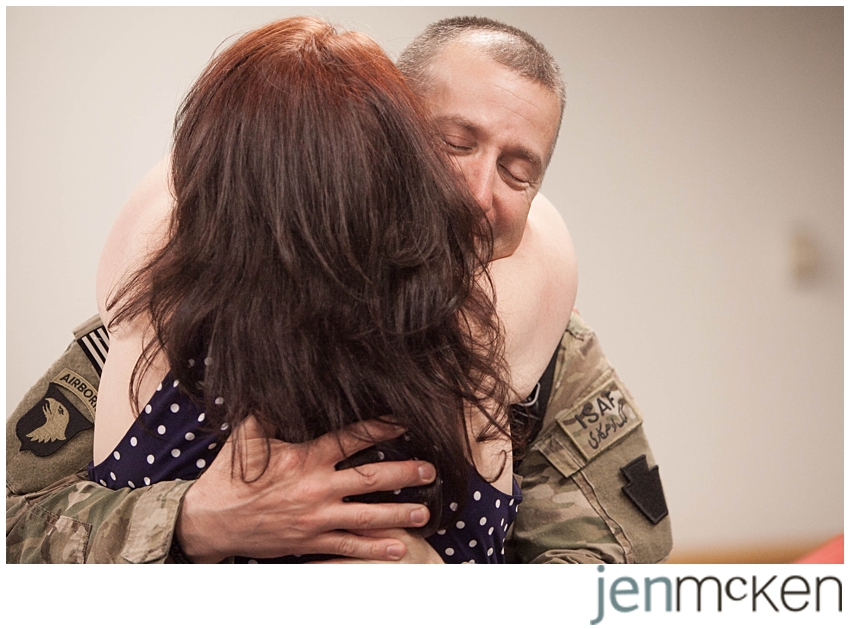 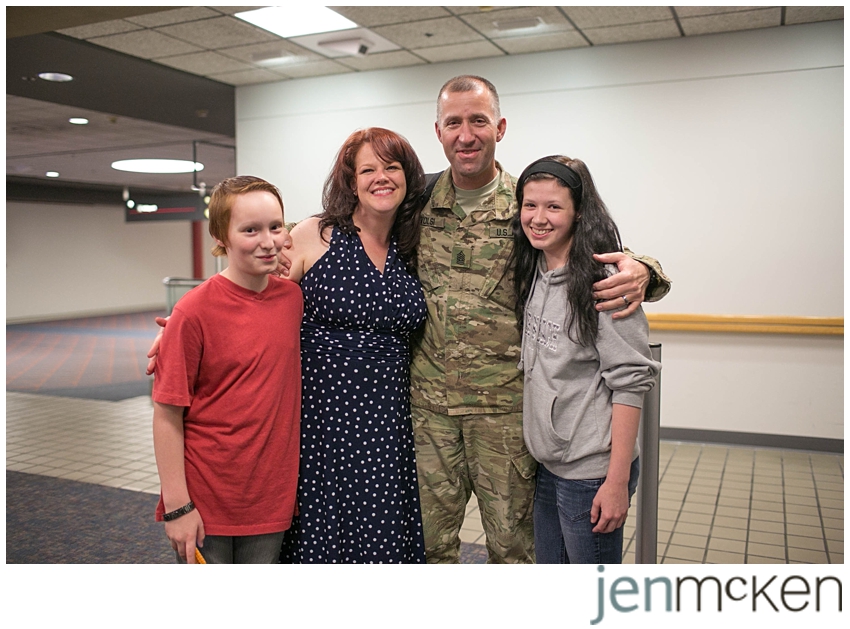 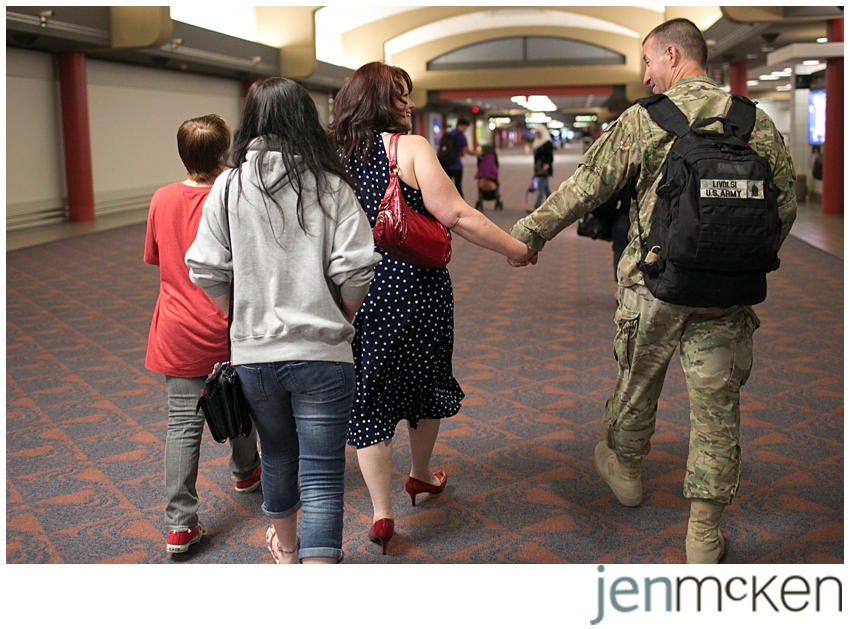 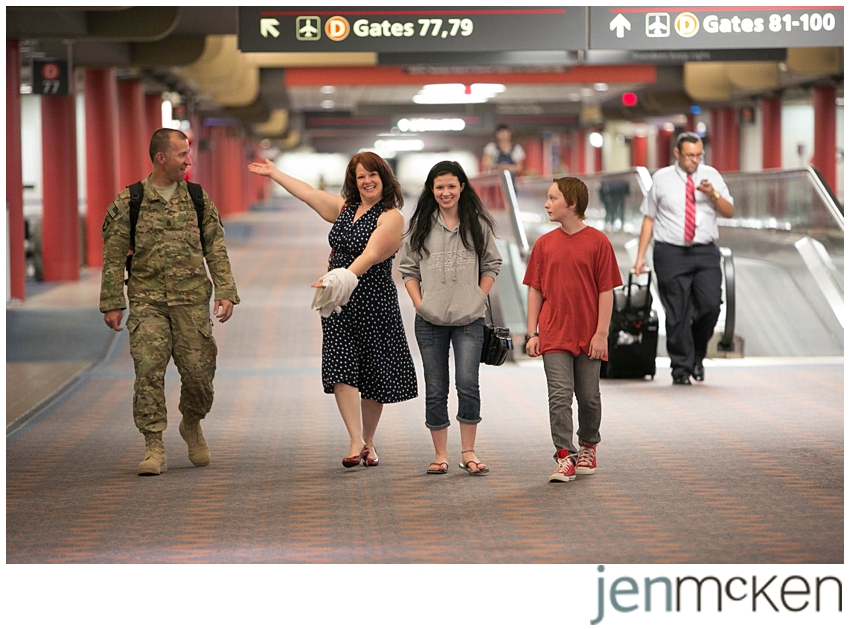 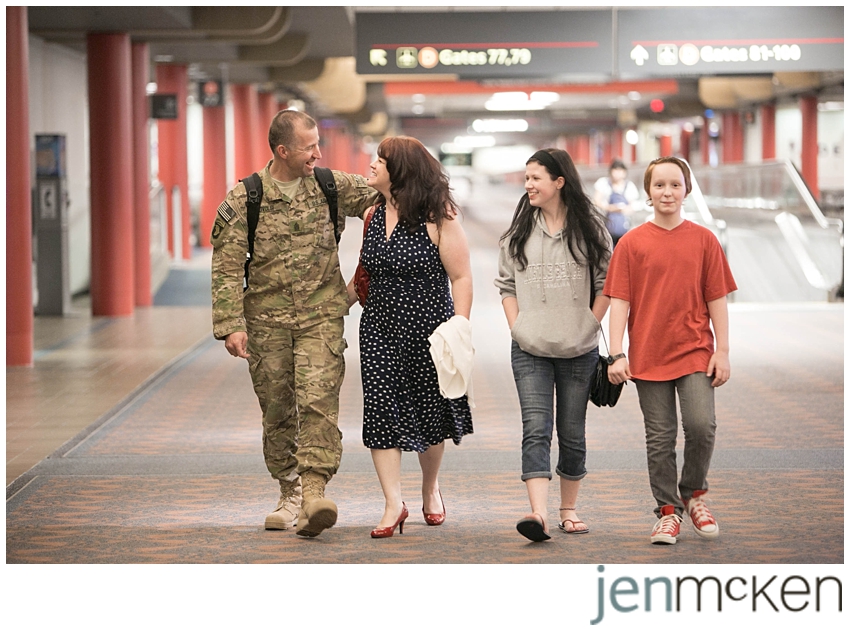 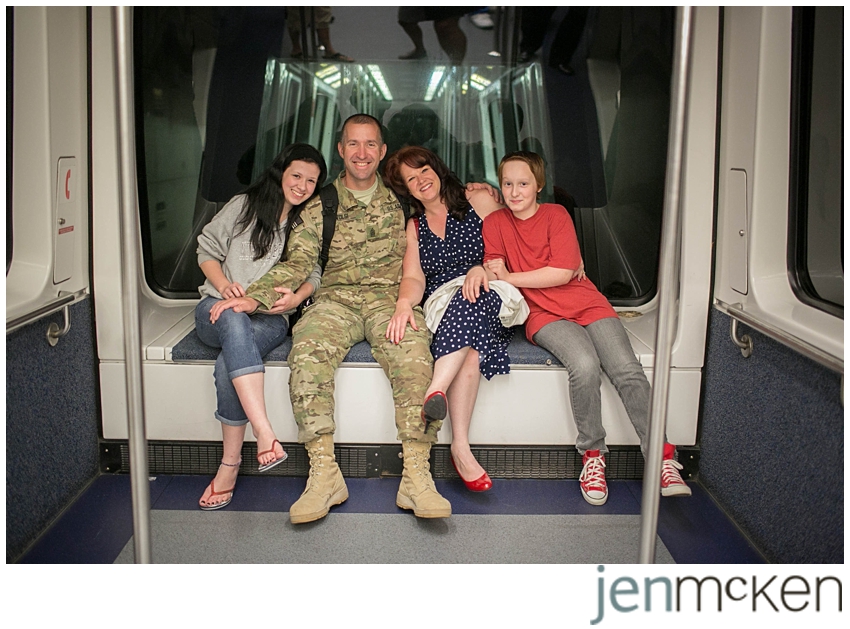 Back together again……even if it is on the airport terminal back to baggage claim!!! 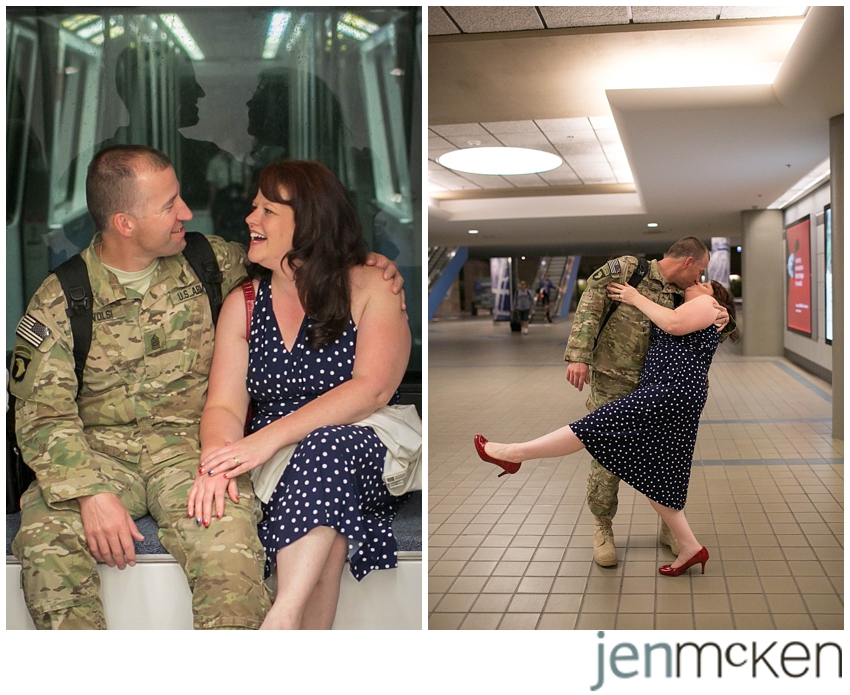 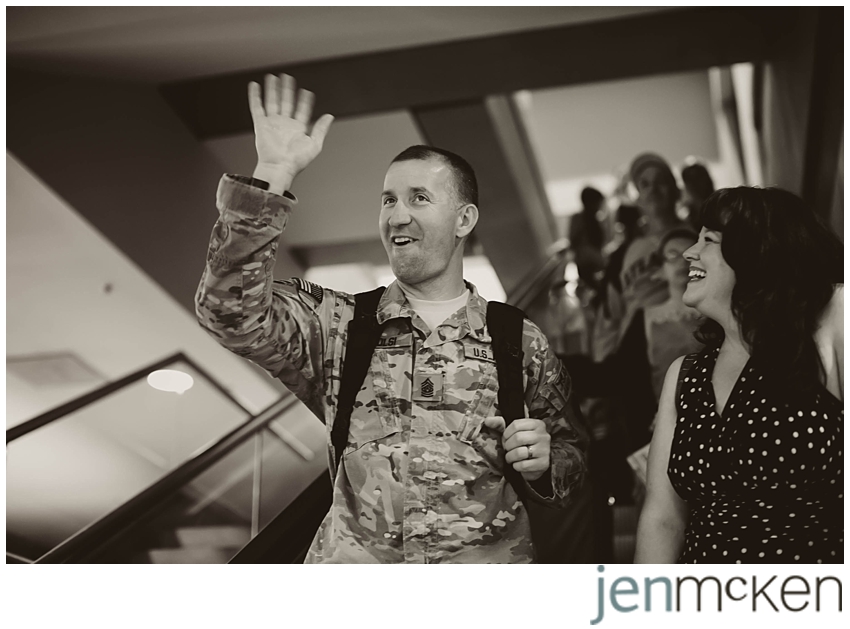 And the look on his face when he sees some of his co-workers there to greet him at the airport! <3 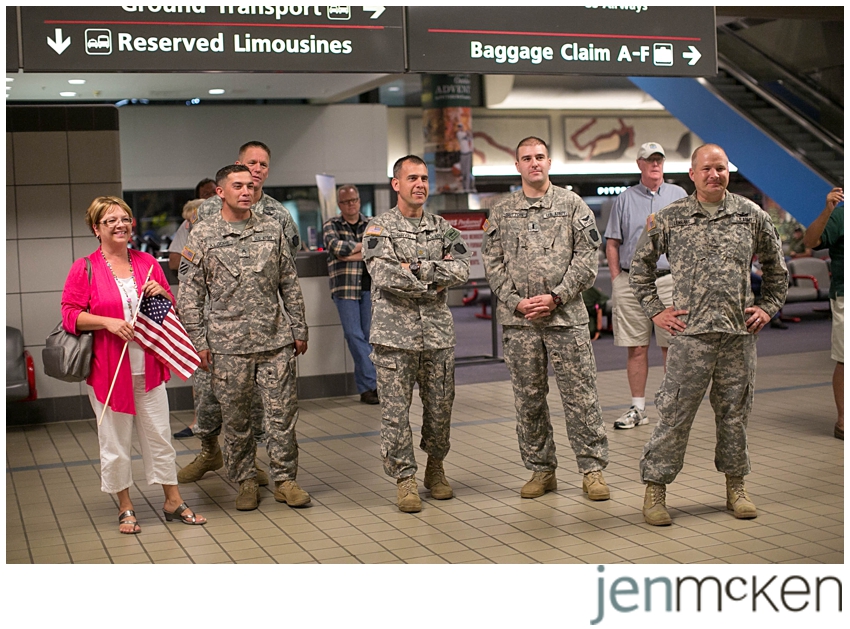 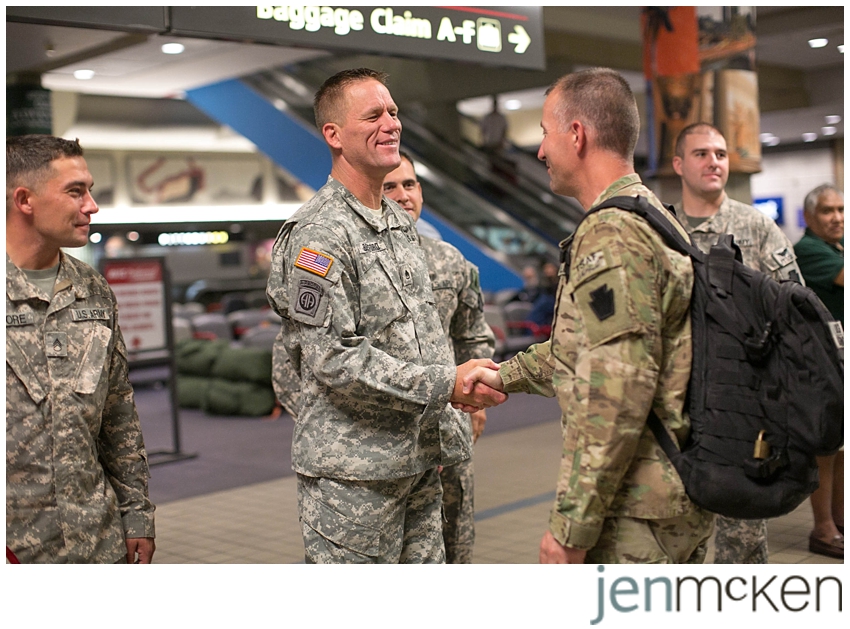 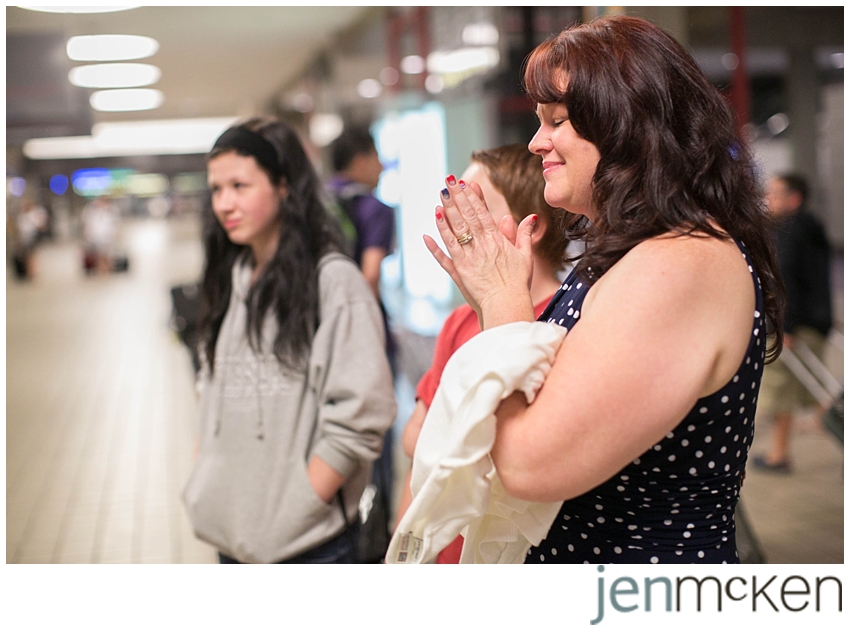 I caption this: “Thank you Jesus, he is home and safe” <3 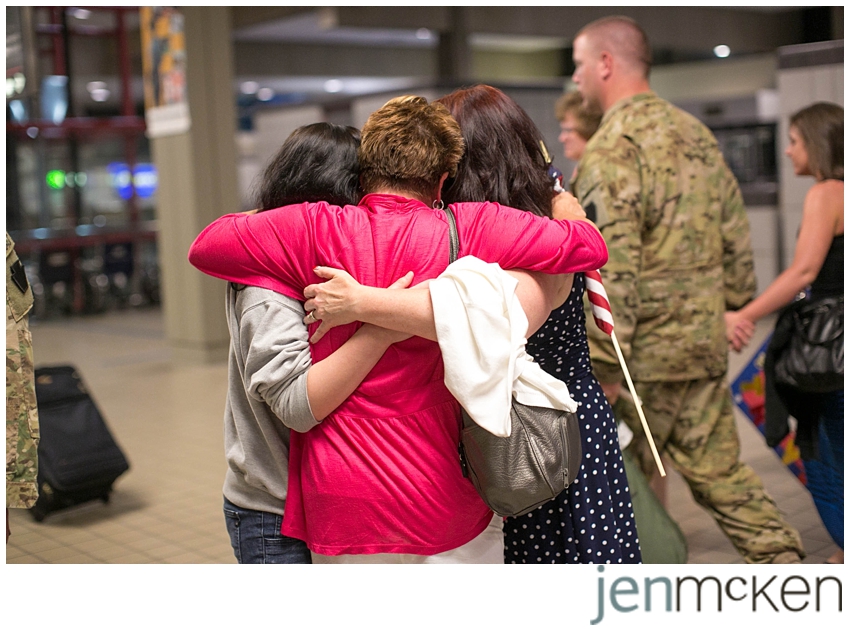 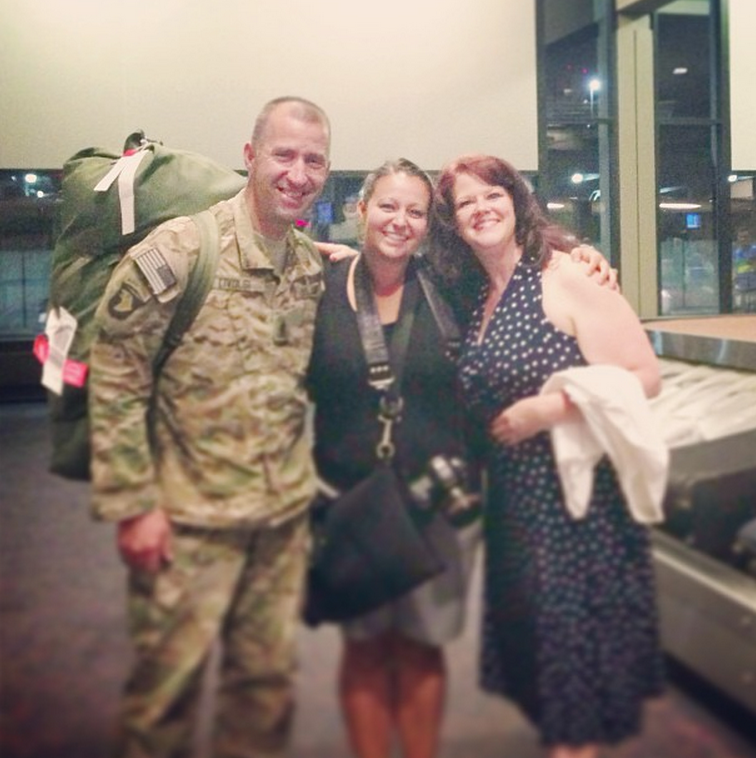 Who knew, forgetting my camera at our first shoot that we’d still be friends! I guess everything does happen for a reason!!! Thank you Sean for your service, you’re a true hero……to a hot mamma jamma wife! <3 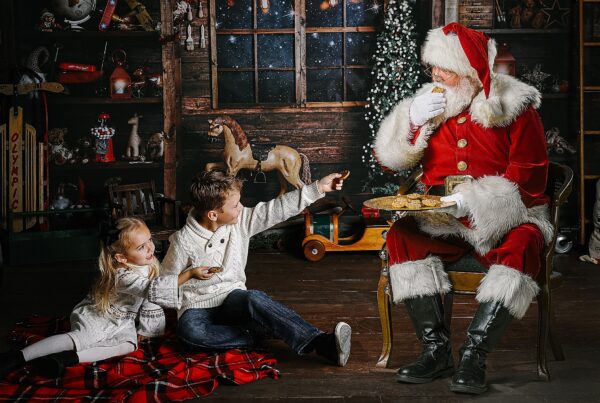 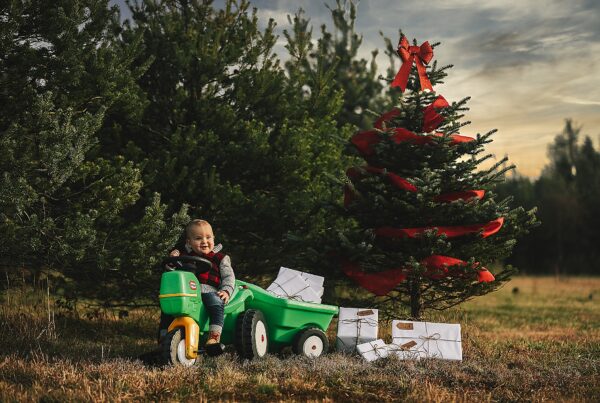 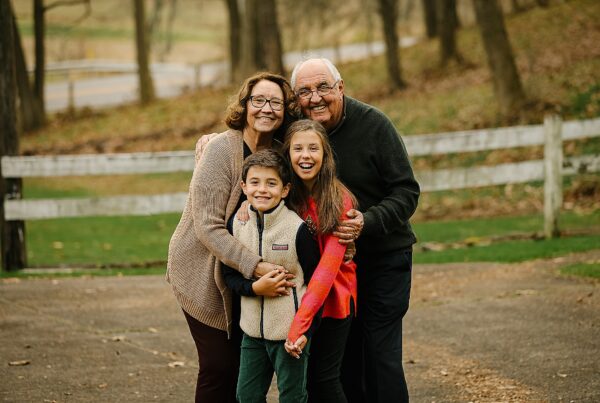 Including the Grandparents | Extended Family Sessions