I’ve always been the thrill seeker in family.  I love roller coasters and anything else that goes high or fast. I’d be the first one to raise my hand for any kind of adventure….and I’ve wanted to go skydiving for soooo long-but there was one thing that was holding me back……my weight! Now that I’ve lost 80 pounds, the world looks so much different. I’m getting to experience things that weren’t physically possible before….and thanks to a surprise from Greg and Mallory, I finally got to check something off my bucket list!!! I GOT TO GO SKY DIVING YA’ALL!!!

Here’s the picture Mallory drew to surprise me!! So stinkin cute….I love how she was going to be at the bottom to catch me! haha! 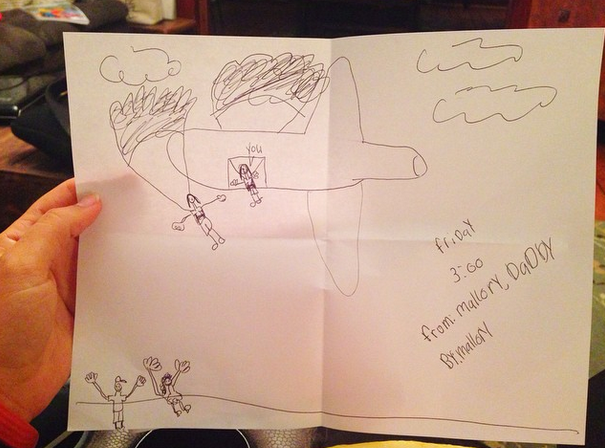 Several years ago, a group of my friends were making plans to go, I realllllly wanted to go so bad but as soon as I hopped on the website to look for additional information on pricing -I found the dreaded weight limit! My heart sank because I knew there was no way I could go……and if I tried- I imagine this big scale where the number would come up in front of everyone and I would be insanely embarrassed, they would ask me to leave while everyone pointed and laughed. I know, I know, I’m being dramatic, but unless you have ever struggled with your weight…you’d never understand the dialog that goes on inside when it comes to things like this!

I’ve taken the hypothetical jump many many times of my life….. my weight loss was one of them putting myself out there publicly but I have three major jumps that have changed my life dramatically!

Jump #1: I took the jump in college when deciding to go to get my bachelors degree with zero money and all the odds against me…. I laid in bed the first night without money for books and cried myself to sleep, I knew there had to be away. Four years later (on time), I graduated as the first one in my family to have ever graduated college–or high school for that matter! Six years after that I paid my student loan’s off in full! I kicked Sallie Mea to the curb!!

Jump #2: The next leap was into parenthood when along came my daughter…. I was kind of pushed out of the plane on that one! Sure she was a surprise and yes I was young (21) but looking back I wouldn’t have planned it any other way! She had a very tough start with being only a little over 1 pound at birth-she was a fighter from the beginning…. I truly believe that she was brought here to show me that life is too short!

Jump #3: The next giant leap I took was for my job… my full-time photography job! I left a perfectly stable job to take a jump in to entrepreneurship! That silly saying, “if you jump, the net will appear!” Yeah, well it’s true and oh man do I feel silly not doing that sooner! That was probably one of the  scariest jumps I’ve made only because the birth of my daughter I was kind of pushed out of the plane and didn’t have a choice but this when I was completely conscious of every decision I was making. How it could affect my entire family! I think were taught from a very young age that were supposed to go to school graduate accumulate debt and then go off to work for someone else… ya know, so we can get a big retirement fund! That’s certainly what my family thought growing up…and in a sense, you’re working hard all those years to make someone else’s dream come true!  In my case, there was never any encouragement in school or home to work for myself -to be an entrepreneur to go out and make my own job. We’re drilled that we’re supposed to work for someone else to help build their dreams just so I can get a beefy 401(k)! Welll….. another funny thing you can totally get a beefy 401K by working for yourself just in case no one told you! Oh and you can pay off your student loans and you can pay off your house-just sayin!! I figured if at least I got out there and tried and failed I would know and have a peace of mind of knowing that I at least tried and not be stuck in the “what if”! And what they say is you never really fail unless you stop trying!

So as you can see although *THIS* jump was in the physical form- I feel like many of the other emotional jumps I’ve made have been way worse…. and even in some ways  were way exhilarating! But oh my god was that fun!!!

One thing I’m going to teach my daughter is that if she ever finds herself at the edge of a cliff or in my case at the end of a plane is to jump! And just as they take precautionary safety measures with your harness and double checking your parachute, I’ll encourage Mallory to do the same thing…. but I wanted her to jump and I want her to know that the net almost always appears!

Anything good or great or exhilarating that has ever happened in my life has come from a huge risky leap. When you play it safe your whole life you don’t really get a whole lot done–and I’d venture to say, life isn’t quite as exciting! I never wanted to be that old person waiting on their deathbed wishing that I would’ve tried something wondering what it would’ve been like. 🙂 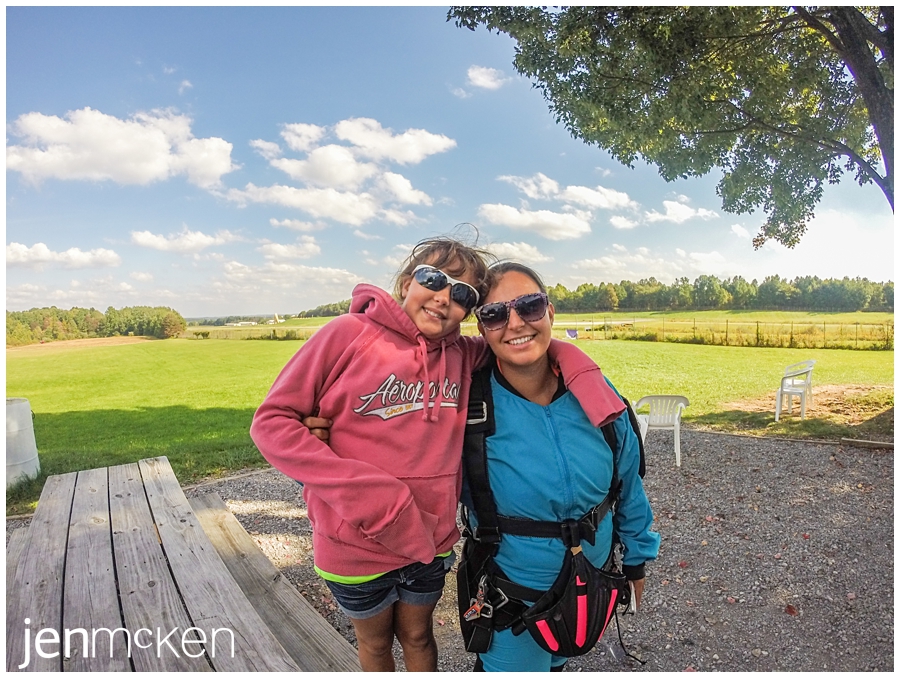 Miss Mallory and I <3

Heading out to the plane……where we’ll be squished like sardines!! 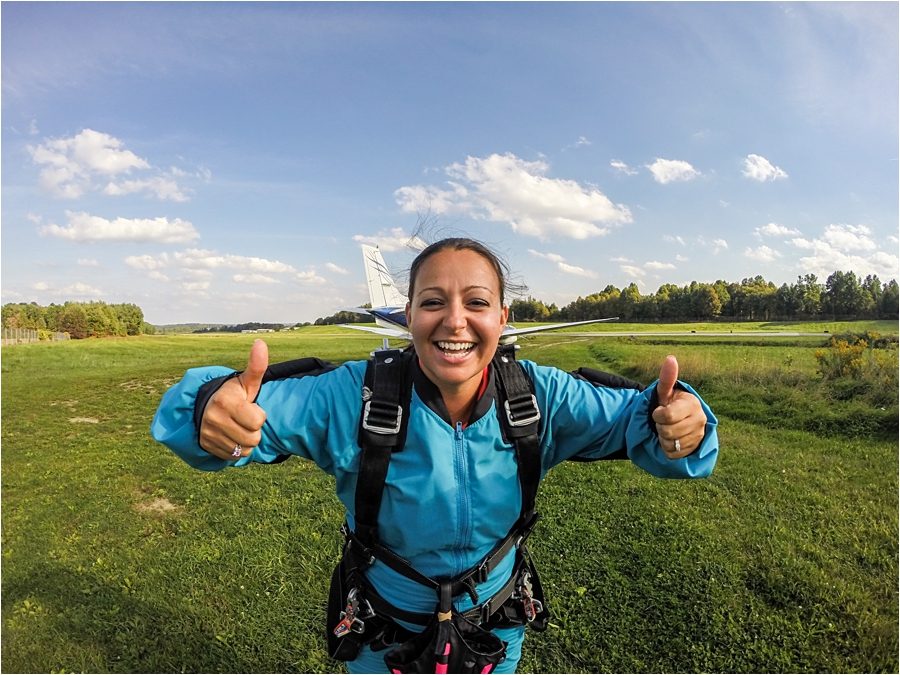 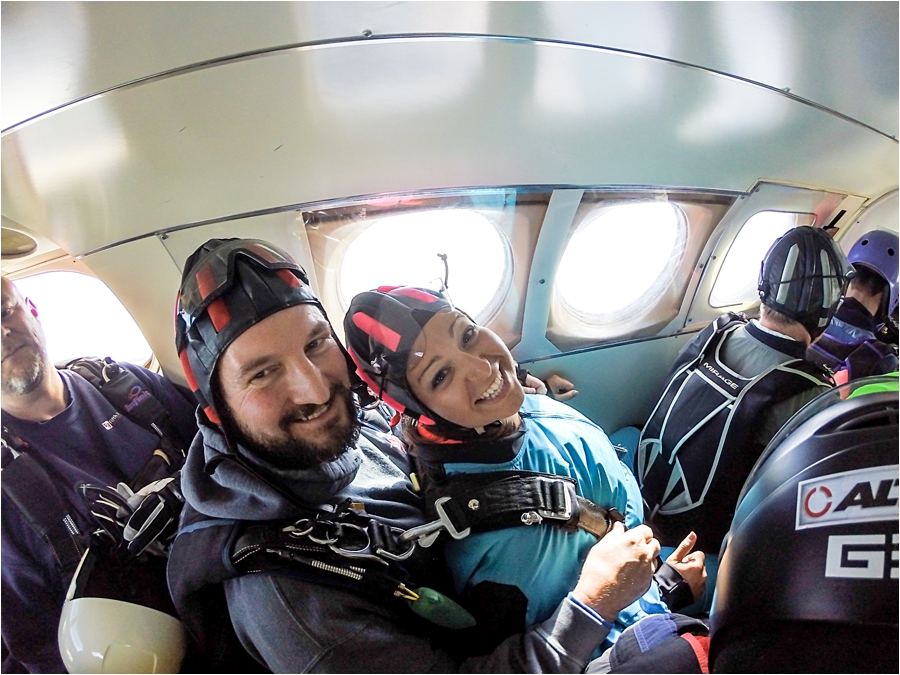 I told you were were sardines! 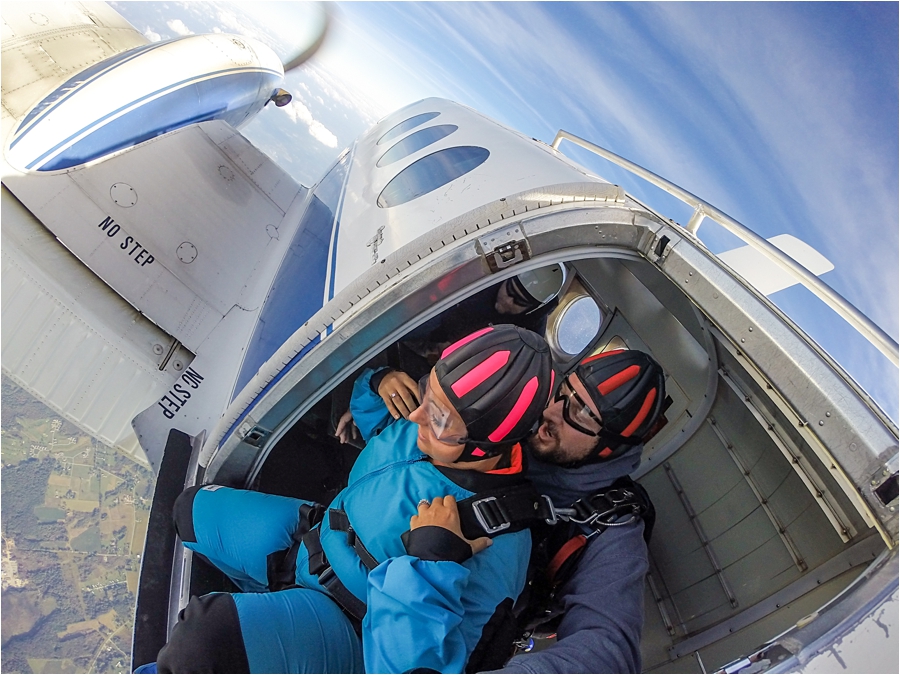 …the moment of truth!!! This was my “oh my god I’m really going to do this moment!!” 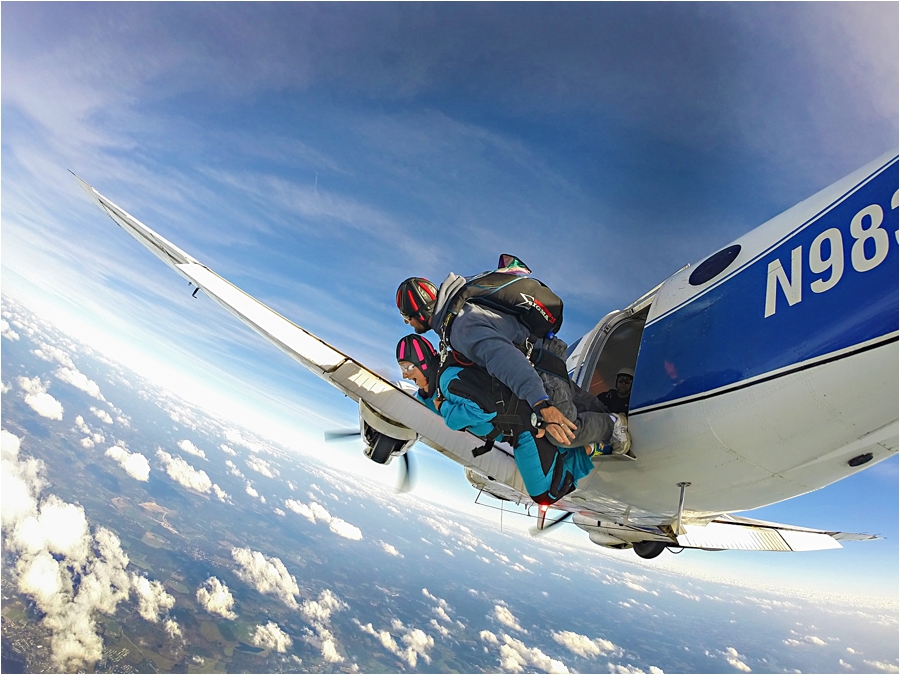 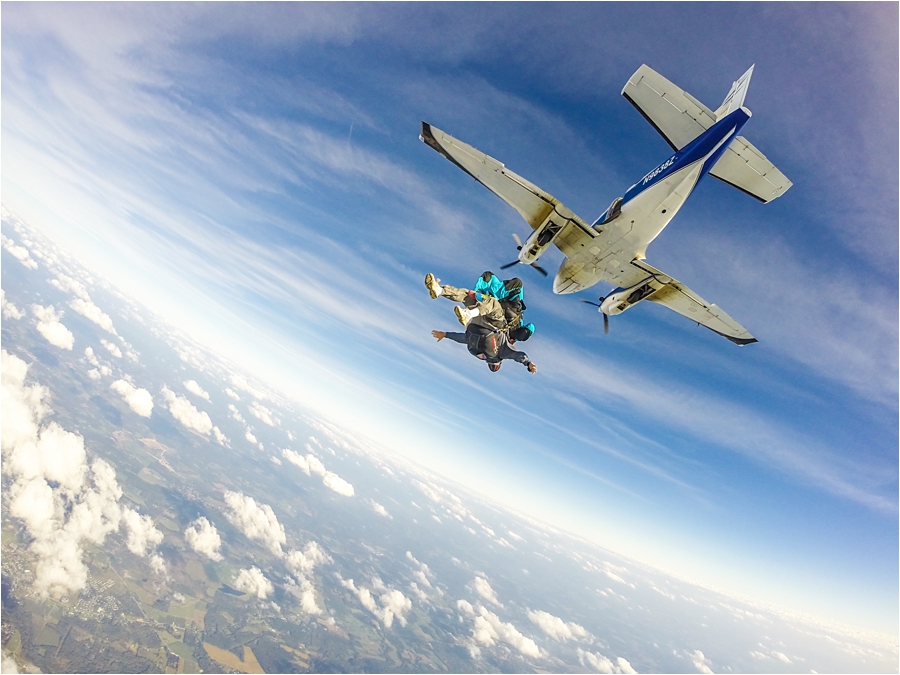 The most awesome feeling EVERRRRR….120 MPH for roughly 60 seconds before the parachute deploys! 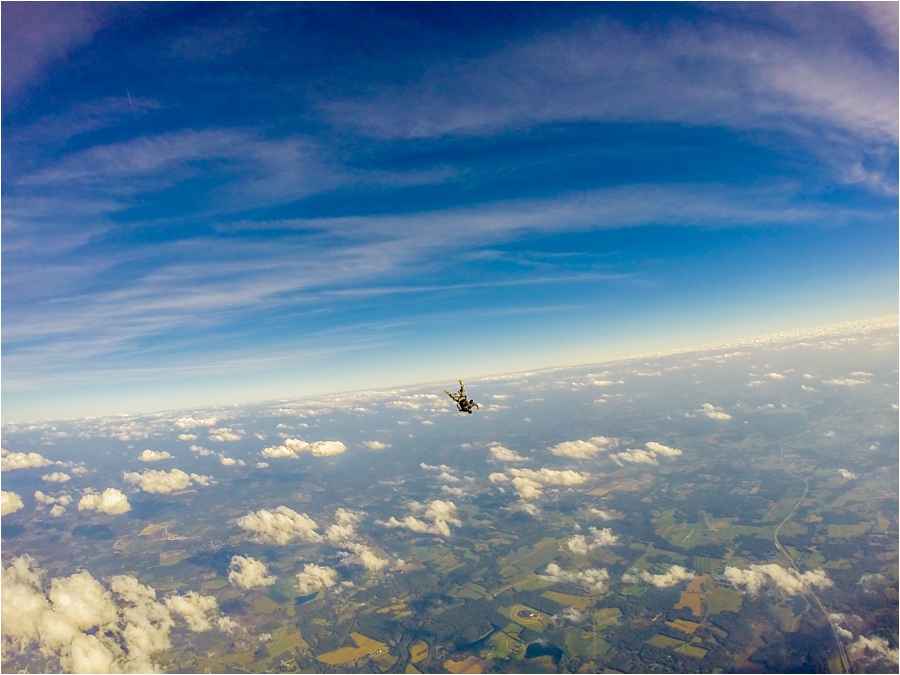 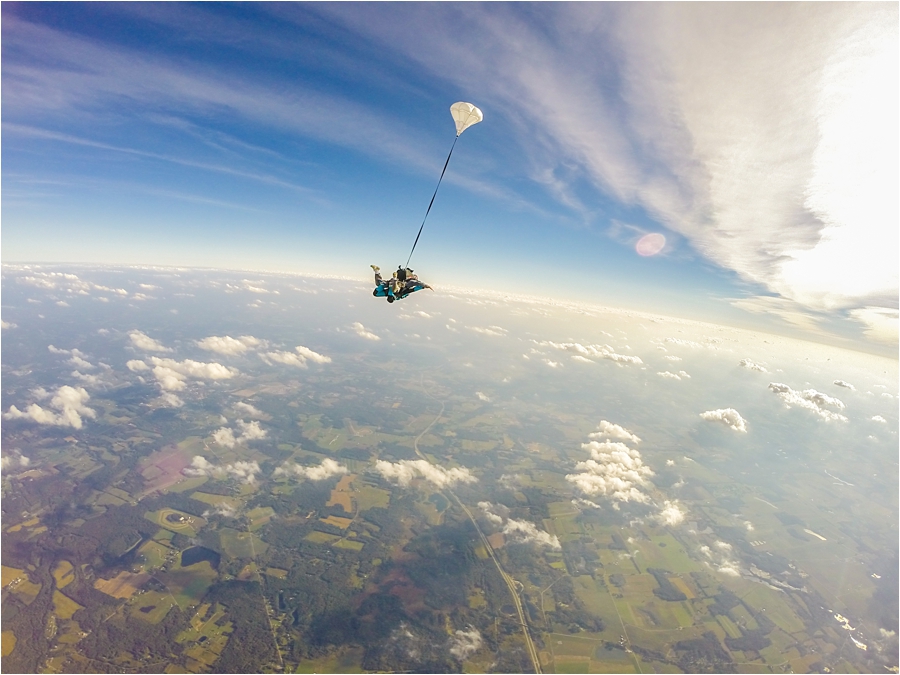 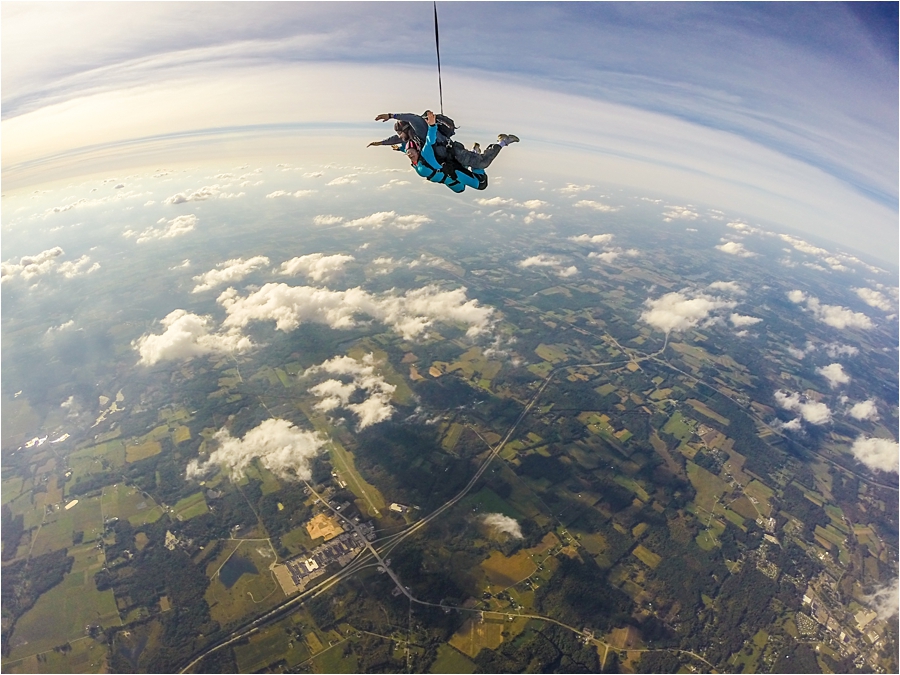 We live in a beautiful world…. 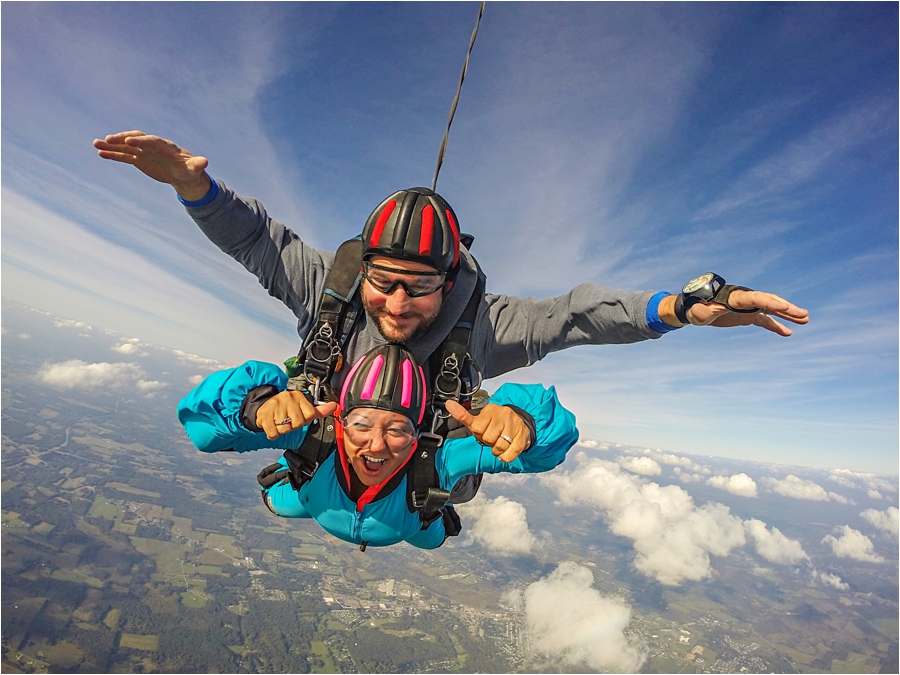 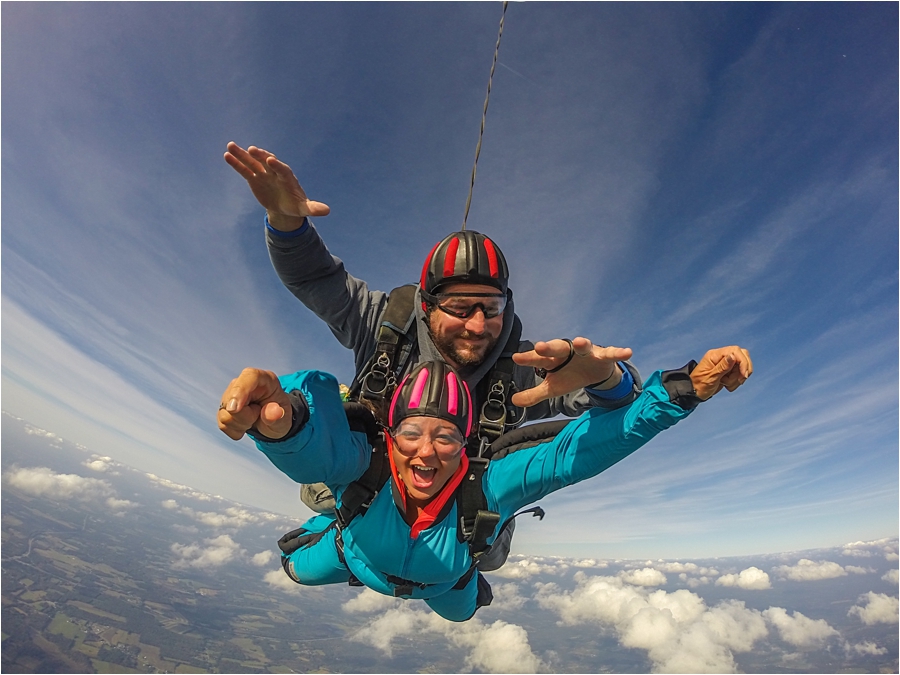 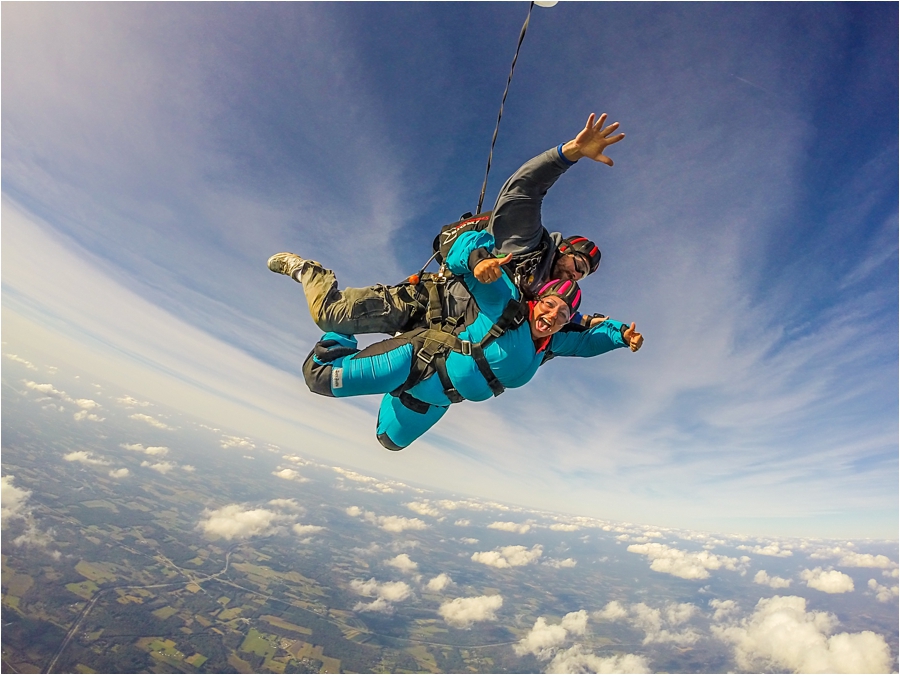 Such an amazing experience! 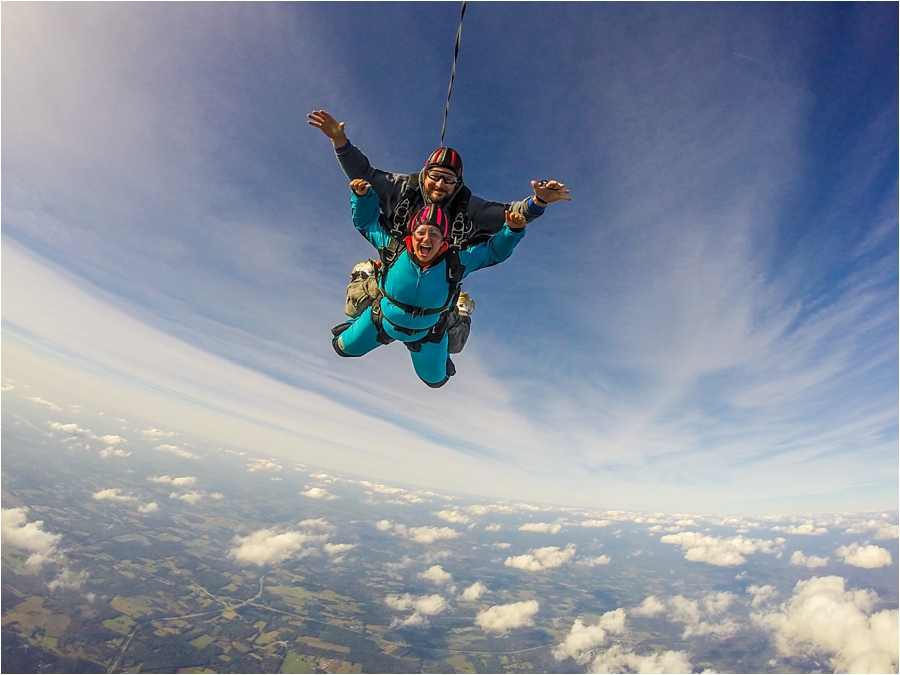 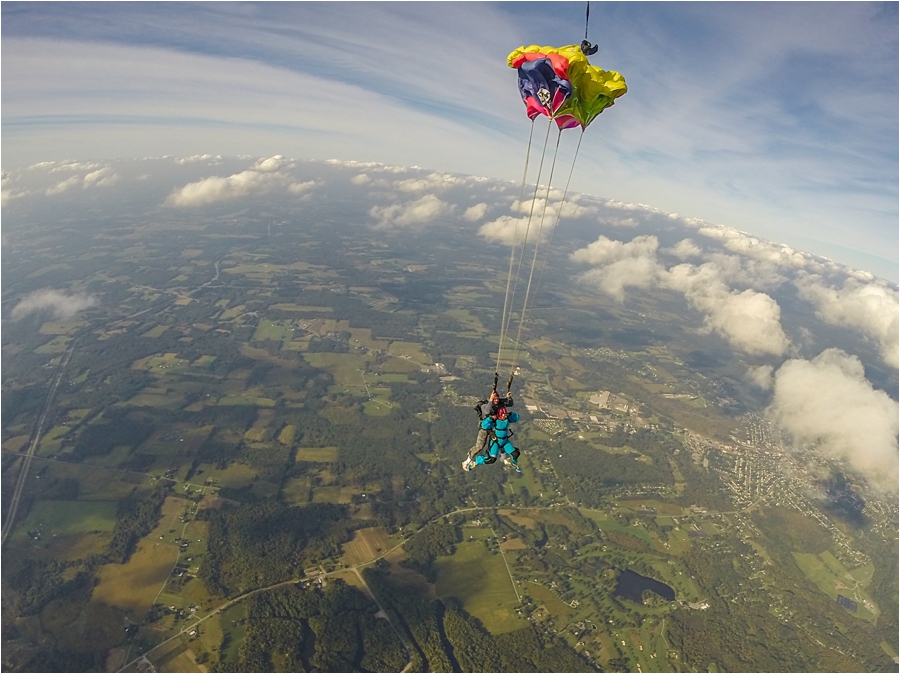 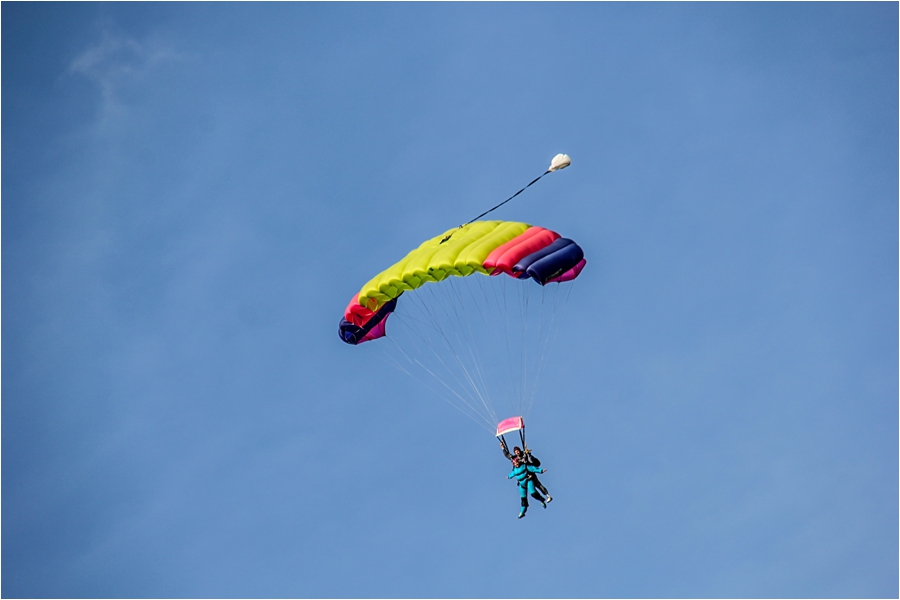 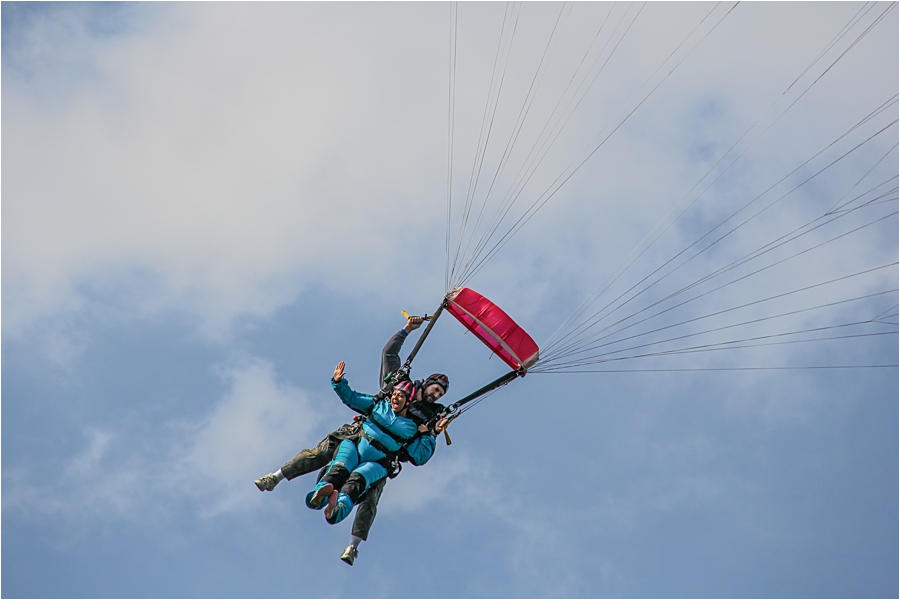 And the landing…..we landed on our bum! 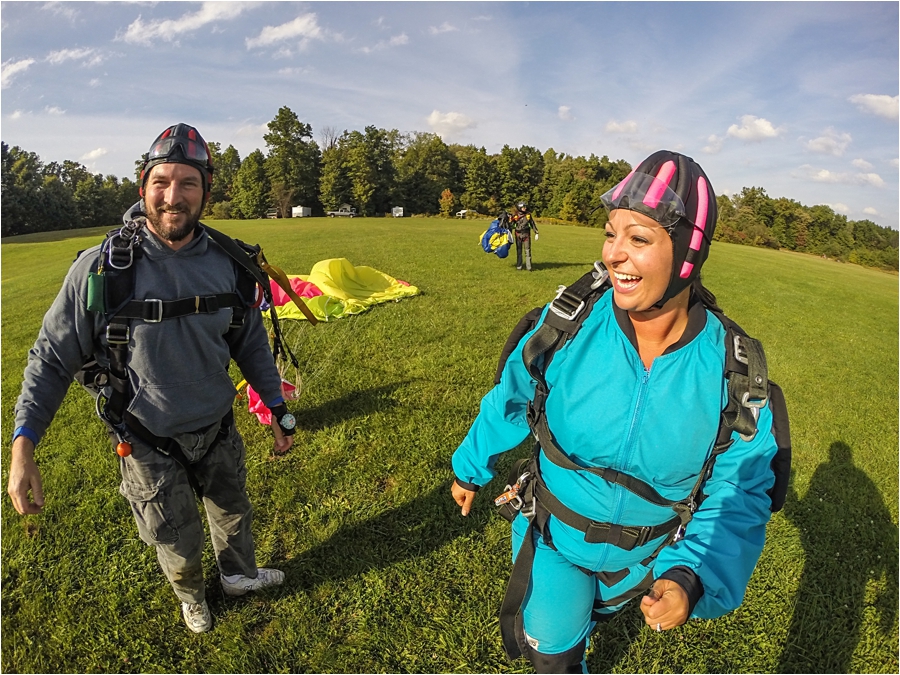 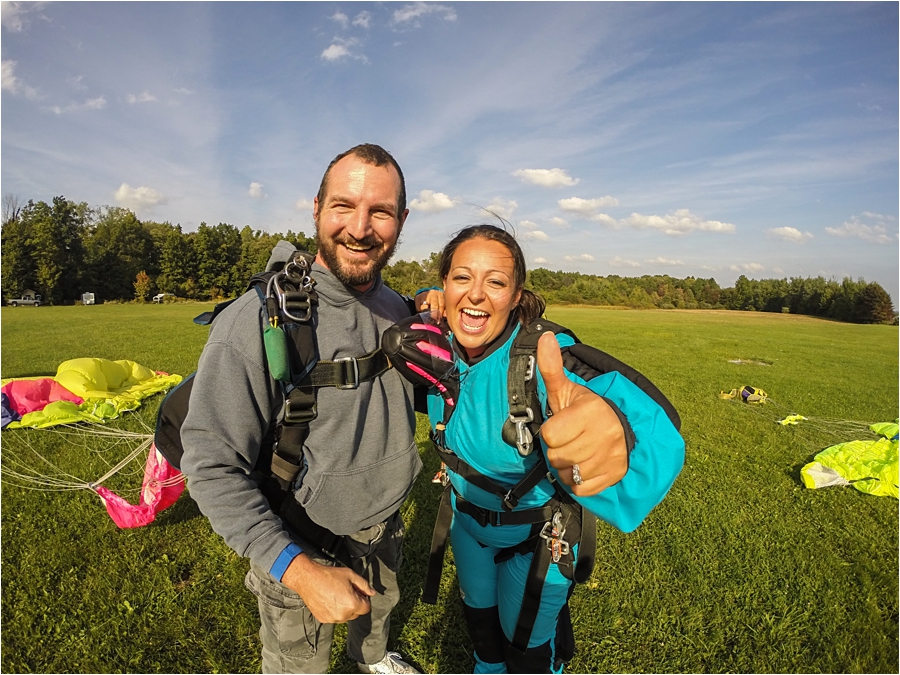 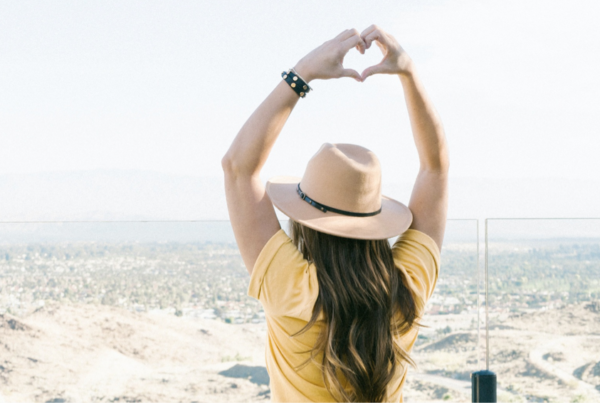 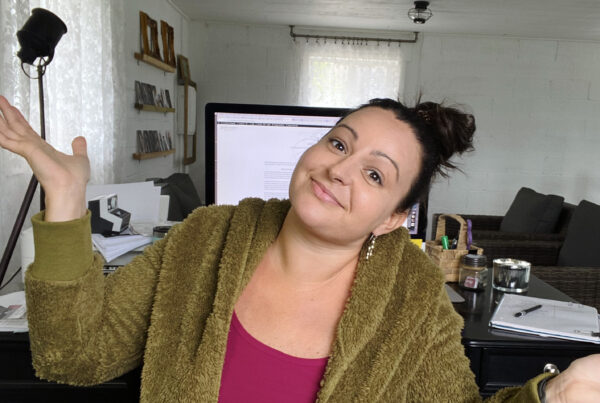