“this time around” | I’m officially over the bump (pun intended!)

So I’m officially 28 weeks (helloooooo 3rd trimester!!)…….not that it’s a huge mile some of you-but for me….I’m officially over the bump of when Mallory was born! I feel like I can take a deep breath. I think it’s starting to feel “more real” now that I can feel the baby moving stronger and more frequently. It’s still not enough for Greg or Mallory to feel but I can feel movement and that’s exciting. I know what you’re thinking…”Jen, you already have a kid-this isn’t your first rodeo!” Well…..yeah, it kinda is. Mallory was born so small and I didn’t have a typical pregnancy with her. As a matter of fact, besides the million doctor appointments, I never really FELT pregnant…nor did I “look” pregnant. I just didn’t get to enjoy that pregnancy like I am with this one. She came REALLY early measuring at 28 weeks gestation and only weighting in at a little over a pound….told you I didn’t have a normal pregnancy! It’s SUCH a relief to me knowing that I made it past that time this time around. You know what they say…every pregnancy is different….but that first time around scared the crap out of me that I decided to wait 11 years! haha!

So how is it different this time around so far? I realize I’m writing this rather early in the pregnancy and anything could change at any time, but let a sista enjoy it while it lasts will ya!?! haha!

Well #1: No morning sickness.…..at ALL!! I use to give dirty looks to the women who just LOOOOOOOVED being pregnant, who were constantly glowing and feeling great thru their first trimester. I use to think…”this is miserable”. I was soooo sick with Mallory. I was hospitalized several times for dehydration and not gaining weight (losing tons of weight) because I couldn’t keep anything down long enough. And if one more person would have told me to eat crackers I would have personally ripped out each and every once of their fingernails….one by one! haha! This time, I haven’t gotten sick one single time and I’ve been feeling so great! Besides being a little more tired every once in a while, I feel fantastic! It’s amazing how I feel this time around. I’ve had lots of energy and I didn’t have to puke in the bushes <----true story! #2 No bed rest! I use to think that I would KILLLLLL to lay in bed all day and not do anything. For most people, that sounds like a dream come true….I’m here to tell you….it’s NOT at all! It’s boring, it’s lonely, you feel held hostage, you get sore from lying in one spot all day and you get cabin fever. One of my friends was telling me that I should’ve thought about getting one of the top adjustable beds on the market whilst I was in bed all day. She said that adjustable beds are better because they can be moved around until you’re comfortable, and they can be lowered to help with getting in and out of bed which can be difficult when you’re pregnant. Maybe that would’ve made the process a little easier. The reason I was on bed rest with my first pregnancy was that I had Placenta Previa and in order to make sure baby stayed safe, they stuck me on bed rest for 3 freakin months!

#3 I’m not leaking fluid! I’m not talking about the oil in my car…I’m talking amniotic fluid. HAHA! Ultimately the reason Mallory was so small was because I had been leaking fluid for several months which left no room for her to grow and resulted in her being born early thru emergency c-section. This kid…..he’s got lots of it and is growing healthy and right on track.

#4 I’m in a different place mentally, physically and emotionally. I’m older….12 years older to be exact which means I’m not fresh out of college, scrounging to find a “real job” after just getting my degree, I didn’t JUST buy a house and my mind is so much more mature than it was all those years ago. I remember finding out I was pregnant one month before my college graduation. By the time Mallory arrived, I was a freshly new college graduate who still wasn’t sure where I was going to land in the big bad world. I had tons of debt (mostly from school) but we had just purchased a home and from not working as many hours, we had accumulated credit card debt. Of course, we’re in a much better place now thanks to our friends who were able to recommend that, once we’d sorted our debt, we should consider trying to rebuild our credit slowly by getting another credit card and keeping the interest low. By doing this, you can build your credit score up, increasing the chances of getting future loans. There’s more info here if anyone’s struggling to build up their credit rating. Anyway, I’m also at a much healthier place with my weight and my thyroid issues which we didn’t know about at the time are all under control. My oh my how things have changed. I’m so much more secure in my career, my finances and emotionally, I’ve grown so much….we both have! It feels like a whole new experience..and I’m loving it!

#5 I was able to find out the gender!! Because of the complications I had in the beginning of my first pregnancy, I was required to have a sonogram very early in the process just to ensure the pregnancy was still viable. Due to insurance reasons (they only permitted so many) and my doctor wanting me to wait a little longer to have my next sonogram due to that….I literally found out I was having a girl an hour before I was rushed back to have an emergency c-section. I had less than one hour to let it sink in before shit hit the fan…this time around, I had a sonogram at the normally schedule time and found out we’re having a BOY!!! I get to let it sink in MONTHS in advance and just enjoy the process a little more!

#6 It’s not as lonely. I was the first one of my friends to “get knocked up” as they say. Everyone else was getting out of college and doing the normal 21/22 year old “thing”, I was at home caring for a newborn…..not to mention that house we bought was in the middle of nowhere USA. I mean, I had cows for neighbors and it took like 30 minutes just to get somewhere for milk….so it wasn’t like I could walk down the street and visit with neighbors per say.

#7 Greg and Mallory were able to feel the baby move! The first time around, Mallory was so small and being constricted that when she did move, I wasn’t able to feel them. I never got to experience the kicks and jabs that I would always hear other mom’s to be talk about . This time, it’s he’s a ninja and you can see all kinds of kicks from outside without even putting your hand on my belly. It’s an awesome feeling and something I will never take for granted.

#8 I get to decorate the nursery! WHAT WHAT! Not only did we find out that we were having a boy MONTHS in advance, but I’m able to actually pick out things to decorate a legit nursery IN ADVANCE!!! I’ve seen some peel and stick wallpaper as well as some wall decals that I’m really keen on buying just to get a head start on the decorating!

#9 I’ll have a little helper. Mallory is so excited for her little brother to get here. She loves kids and is like a little mother hen. I know she’ll be a big help…and she’s going to be an amazing big sister.

#10 I’m having a baby shower BEFORE the baby arrives! Mallory came so early that we ended up having the baby shower AFTER she was born-I don’t remember much of it. It was a blur to me because I had left the hospital with my mind on her as I attended the baby shower my family thru together quickly for me. This time, we got to send out invites, I’ll be able to enjoy it with a little less stress!

#11 Social Media! I remember passing around a photo album of her NICU photos at the shower because only immediate friends and family where allowed in, the only way people could see her was thru those photo albums. At that time I didn’t have Facebook, so keeping friends and family up to date was kind of exhausting. Everyone would want to call but we were absolutely exhausted from traveling to and from the NICU in Pittsburgh that the last thing we wanted to do was chat on the phone with a hundred different people. Now with the power of social media, we can keep friends and family update from hundreds of miles away

#12 They get it now! 12 years ago when Mallory was born, I was the first one out of my group of friends to get pregnant. While everyone else was out doing what normal twenty-something’s do, I was at home caring for a baby. I remember getting calls 5 minutes before everyone was going some where see if we wanted to go…they didn’t understand that 5 minute notice was not enough, they didn’t understand why we didn’t come to their “non-kid friendly” houses, why my schedule changed, etc. They didn’t have kids and they didn’t get it…….but now they do.

#13 I’m self-employed! TOTAL BONUS!! I worked for the newspaper when Mallory was born, the hours were so unpredictable and I was constantly stressed out as to when I’d get called out for an assignment and how I would find a baby sitter on short notice. This time around, my boss is pretty freakin awesome! I have a feeling she’s going to let me make my own schedule for what works for my family. Oh the baby was up all night? I’m thinking she’ll late me sleep in a little later in the morning and get my editing done in the afternoon. I get to decide how many weddings I shoot, how many sessions I take and whether or not I want to travel out of town or not. I get to make all the rules and it feels so liberating. I feel like I created a life that works for my family.

#14 I’m going to have better photos! I will treasure this image forever. One of the nurses snapped it for me VERY quickly before the life flight had whisked her away. She didn’t have to do that for me and I will always treasure it. But this is the ONLY photo I have of her right after birth while we were seprated at different hospitals. It’s printed on computer because that’s all they had that the time and this was the photo I clung too when things weren’t looking very good. She was in the NICU for several months, so I never got those cute newborn photos. My website is filled with beautiful newborn photos of other people’s families and children……this time around……I’m hoping to have that! <3 <3 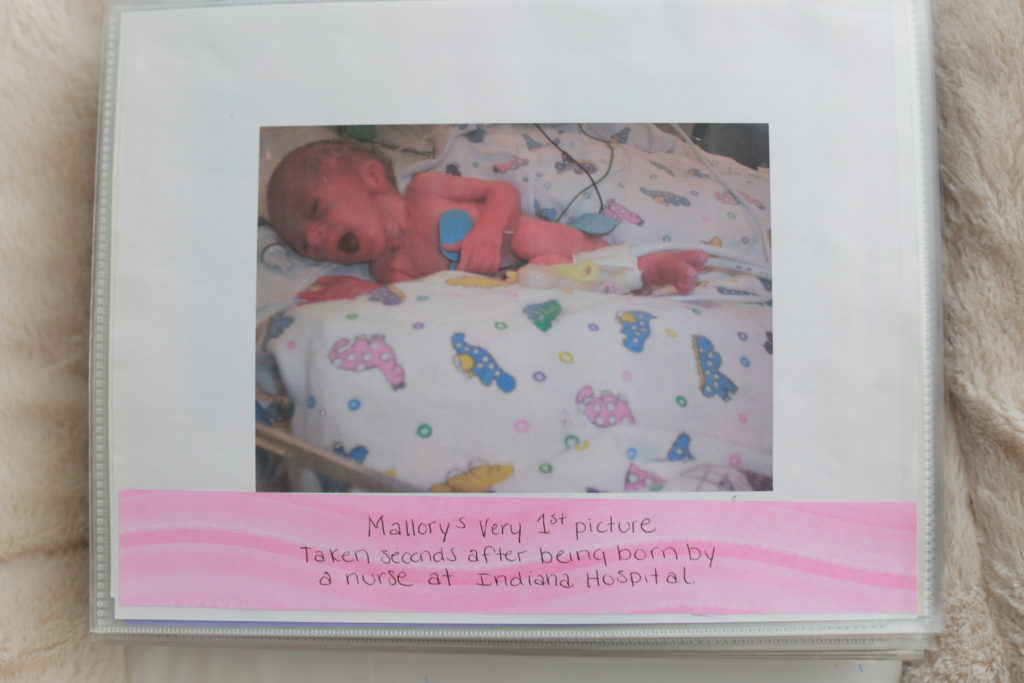 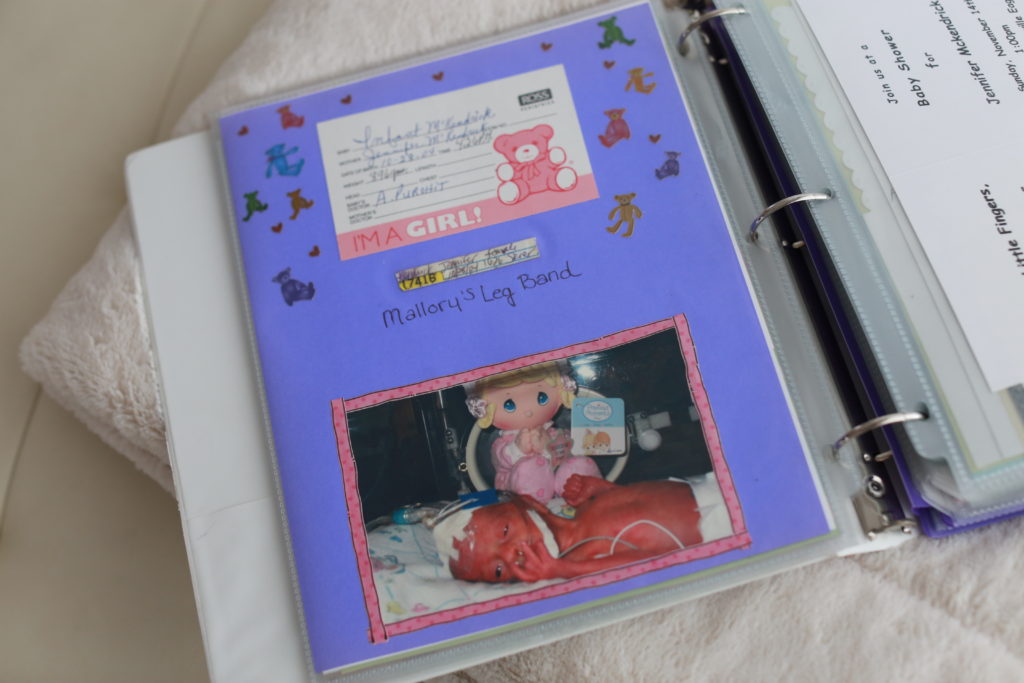 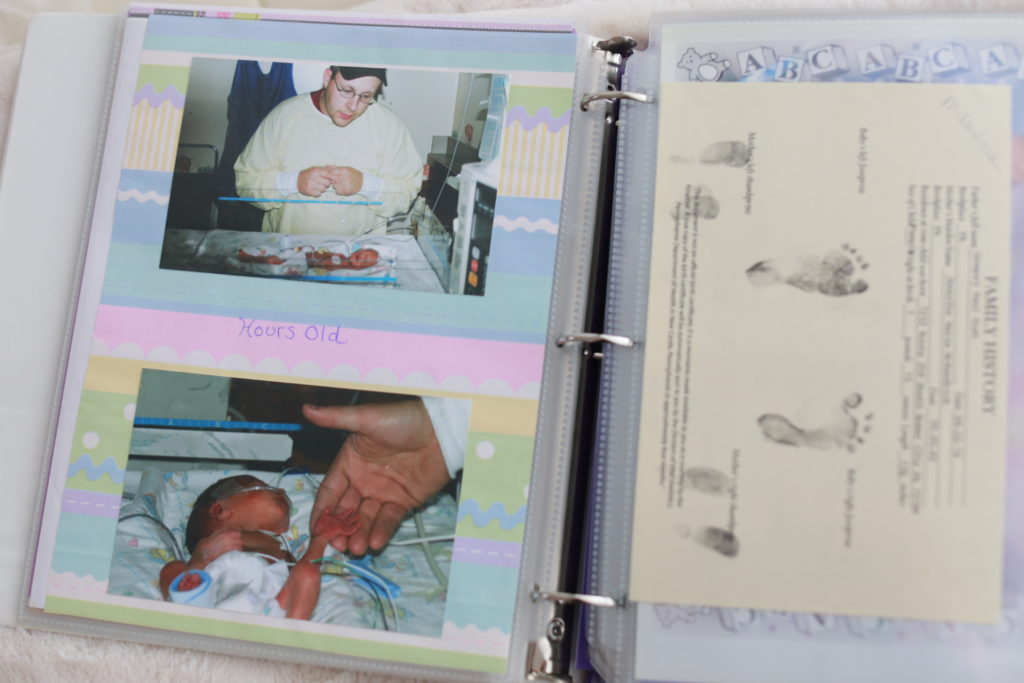 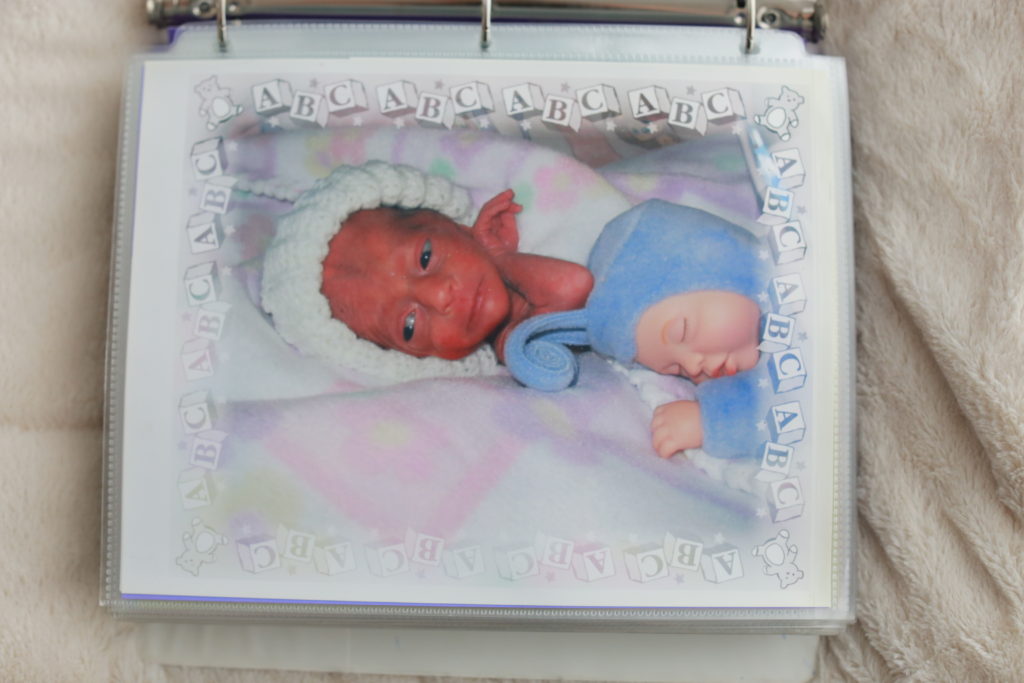 That purple baby….it’s a beanie baby! We still have it and it’s one of those things I will hold on to forever! <3